After the 2016 presidential election, deep divisions appeared on campus down ideological lines. American politics had split our country, and the University of Michigan. A common national narrative began to appear about students who were unwilling to engage with their political foes in a constructive way. But those weren’t the Ann Arbor students we knew.

We founded WeListen to create a place at Michigan for the curious and engaged students we had met — studying humanities, music, engineering, public policy, and business — to discuss and learn about politics in a non-debate setting. The goal of WeListen is to bring students from across the political spectrum — liberal, conservative, and everywhere in between — together to engage in discussions about difficult political topics. 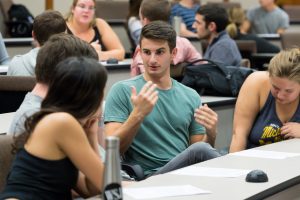 Thanks to a BLI Small Project Grant, we were able to host eleven discussion sessions over the 2017-2018 academic year on topics including immigration, gun control, abortion, and free speech. Our first session, on Refugees in America, attracted just fifteen participants. As we improved our methodology and word spread, WeListen grew. Our first session of second semester brought 93 students together to discuss Free Speech, while maintaining strong conservative presence, and keeping discussion civil. Soon after, a group of University of Michigan staff members formed a committee to start the WeListen Staff Series — a monthly, staff-only set of WeListen sessions.

In 2016, there was no place to go after the election to find out why someone voted for the ‘other side.’ After the midterm elections this year — thanks to BLI’s generous support — students can attend a WeListen- and CSG-led discussion to get to know students who don’t think (or vote) like they do.