It’s five-thirty on a Thursday night. While most people in Ann Arbor are on their way home from class or work, a few dozen people have stopped at the art museum. Sitting in the UMMA’s Stern auditorium are students, faculty, and local community members taking time out of their busy lives to listen to someone tell them a story. This week, said story will come from Maryland writer Rion Amilcar Scott, who recently published The World Doesn’t Require You, his second book of short stories. For now, however, the audience is content to wait for the lights to dim. 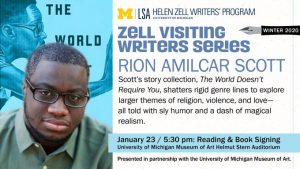 Every year, twelve poets and fiction writers like Scott visit AnnArbor as part of the Zell Visiting Writers Series. Born out of a partnership between the University of Michigan’s Museum of Art and the Helen Zell Writers’ Program, a two-year MFA program in creative writing, the series strives to connect Ann Arbor to the larger world of literature. It does this by hosting events that “celebrate literature and the capacity to inspire compassion and empathy across differences,” said Program Manager Ashley Bates, who graciously sat for an interview and told me about the series in detail.

The lights turn off and the conversations fade away. A student in the Helen Zell program steps on stage to introduce Scott. Then, rising from where he had been sitting among the audience, the man himself takes his place at the podium. Shielding his eyes from the spotlight, he makes a joke about not being able to see the faces of anyone else in the room. Scott then dedicates the following reading to his mother before proceeding to give a brief background on the excerpts he will be reading. “The Temple of Practical Arts” tells of a group of people trying to survive in a harsh world while clinging to music, while “On the Occasion of the Death of Freddie Lee” is a story steeped in magic realism written in response to the Baltimore riots following the death of Freddie Gray while in police custody. And then, audience sufficiently prepared, Scott begins to read.

Thanks to the generous funding from donor Helen Zell, writers asked to participate by upcoming second-year students in the program, as well as by a team of faculty, are flown in from across the nation. Once on campus, they become part of jam-packed two days that involves everything from eating meals with MFA students to appearing in a University of Michigan-based radio show called “Living Writers.” They each spend their time here teaching a workshop and giving feedback on student work, helping emerging authors in the MFA program feel part of a larger community of writers, Bates describes. The Zell Visiting Writers Series also benefits people outside of the Helen Zell program through the Roundtable Q&A and a reading and book signing, both events open to the general public. The Q&As take place at 3:00 on Thursdays in the Hopwood Room of Angell Hall and offer a place for students and other members of the community to participate in a discussion with the author. Readings are at 5:30 on the same day in the Stern Auditorium, with book signings to follow.

Rion Amilcar Scott finishes reading. There is a moment of silence. Then, rapturous applause. The audience is left blinking as the lights suddenly come back on, and we are turned out into the world. People begin to trickle out, some hanging around at the table set up by local bookstore Literati for their chance to get a signed book and speak to Scott before the night ends. For the rest of us, however, it’s time to brave the cold, minds still lingering in the world build by Scott’s reading.