Lisa Makman is a lecturer and the Internship Director in the English department at the University of Michigan. Makman welcomes discussions with and among students both in her classes and in personal meetings, which allows for thriving conversations to blossom from any interaction with her. I sat down with her to discuss how she got her start in English, what she’s reading now, English courses that interest her at Michigan, and more. 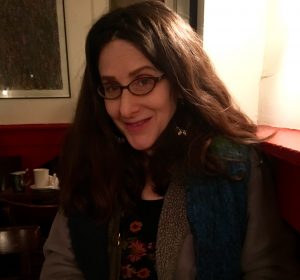 Makman at the Hungarian Pastry Shop in New York City

How she started in English: I feel that reading literature encourages an affect and empathic responses to the other – any kind of other – and that is the medium of connection. So I still stand by the study of literature as important, and on the theoretical side, studying theory gives students frameworks to understand the world and gain some critical distance from themselves and the world around them. What brought me to [English]? I actually went to two different undergraduate institutions, so I changed my major, like, four times, I think. I was pre-med when I started school. I kind of came to literature haphazardly; I graduated with an English degree because it was what I had the most credits in. But [I’m] definitely happy to be in this world!

Current project: I’m setting up this summer journalism opportunity, where we have these community partners – now we have maybe twelve of them, but we’re going to try to get a lot more – and we give grants to students, even graduating seniors, to take unpaid or low-paid internships at these places. I proposed the community journalism class, which is the first internship-based class that we have, and then developed the summer journalism opportunity, which is establishing connections with community partners.

Influential books/recommendations: I love “The Paper Menagerie” and [that whole] Ken Liu collection. I recently read A Tale for the Time Being, the Ruth Ozeki book. I loved that. I also recently read that Charlie Jean Anders book, All the Birds in the Sky. I was very affected early on in my readings, like in high school, by To the Lighthouse, and Jane Austen to fall asleep because I’d read those books so many times. I really loved Ken Liu’s translation of Remembrance of Earth’s Past trilogy. If you’re interested in astronomy and space-type fantasies, it’s incredible. It’s really unlike anything else I’ve read before.

Most overrated author: I feel really bad about saying this, because I love Neil Gaiman, but [Fragile Things] just feels like an exercise in male narcissism. All the characters seem like one person, which is probably him. That’s terrible to say, but sorry, Neil Gaiman, because I love some of the things you’ve done, but this just felt like “Aren’t I cute,” “Aren’t I smart,” “Aren’t I great.” It’s like, “No, sorry, you’re not.”

Writing pet peeves: When you’re reading posts on social media, and people use “I” instead of “me” in the objective. Somehow, that really grates on me when I hear it. It’s like people are trying so hard to speak correctly that they actually get it wrong. 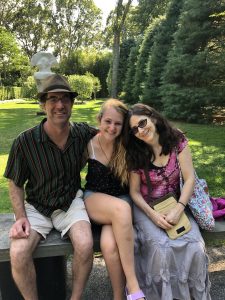 Makman (right) with her husband and daughter

Biggest roadblock: No longer being in a tenure track position, but it hasn’t bothered me. I mean, it’s given me less space in my life for my own writing, but that’s the only thing.

English course she’d like to take at University of Michigan: Every time somebody describes a class to me, I’m like, “That sounds amazing! I want to take that class!” Maybe the Native American fiction class…[the] Jane Austen class where they learn to dance…Lucy Hartley’s theory class…Marjorie Levinson teaches a theory class, too…that twenty-first century science fiction class that Laura Finch is teaching, I really want to take that…honestly, everything sounds great to me.

Dream course to teach: Fantasy was kind of my dream course. And then [the] science and science fiction class was kind of a dream course, too, because of the interdisciplinary aspect of it. I came up with working with people in child life at the hospital, like writing children’s stories that are relevant to the lives of kids who have to spend a lot of time in the hospital, to collaborate with child life specialists. That would be really cool. Something that involves engaged learning.

If not English, then: I think I would probably go into ecological sciences. I just feel like, you know. Nature. Crisis.