One evening last semester, I lounged on my couch with my roommate, drinking hot chocolate while we trash-talked pretension in academia. We complained about articles filled with long-winded jargon seemingly meant only to confuse the reader. We griped about the class readings we didn’t care about but were required to write papers on. We moaned and whined and protested about how we would have to do exactly the things we were complaining about just to be taken seriously in our fields. And then, when our mugs were drained to the last dregs of hot chocolate and midnight deadlines loomed too close for comfort, we sat up, opened our laptops, and got to work on our own pretentiously-written assignments.

This semester, I’ve learned that pretension exists where we want to see it. For some people, that’s in their classes. For others, it’s in people they don’t like. And for still more people, it’s in works of art. I’ve met a lot of people who fall into this last category, and Alison Bechdel’s Fun Home: A Family Tragicomic has been called out by them for this crime. I’m here to debunk this myth. 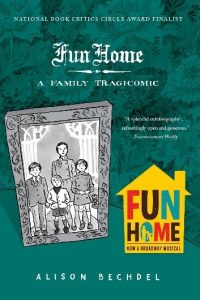 Fun Home was published in 2006. A graphic memoir, it’s Bechdel’s first book, and it tells the story of her childhood and young adulthood. The book examines the relationship between Bechdel and her closeted father, who was killed in a car crash (actually a suicide, Bechdel speculates) while Bechdel was in college. Bechdel combines non-chronological anecdotes, personal reflection, and literary allusions to craft a nuanced narrative.

Like any good graphic novel, Fun Home maximizes the visual element to show the reader what words alone can’t convey. The first panel gives an impression of Bechdel’s father and a young Bechdel: a stern, unsmiling man, absorbed in a book and surrounded by fine things in a cultivated home, and a boyish young girl wordlessly asking her father to play with her, if only for a moment. By leading with illustrations of herself at different points in time, Bechdel creates seamless jumps between years of time. We comprehend these shifts without any written explanation, and eventually, the reader knows which iterations of Bechdel correspond with which periods of her life. 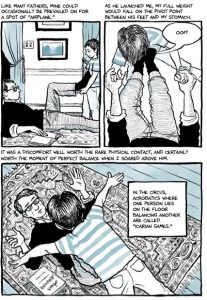 The first page of the book depicts Alison as a child and her father. From Vox

The frequent changes in time depict fragments of memory coming together to form something bigger. There’s Bechdel dusting furniture with her brothers under their father’s watchful eye; Bechdel consuming lesbian literature in her first year of college; Bechdel’s father crossing the road, lugging an armload of branches over his shoulder, as an oncoming truck emerges from the panel’s background. At first, each memory’s relevance may be unclear. But as Bechdel weaves the pieces of the narrative together, the meaning falls into place.

If the work doesn’t make sense at first, that’s because that’s just the nature of memory. It’s not the writer’s job to spell everything out for the reader from the beginning. I believe literature worth consuming asks its reader(s) to do work. If a piece of writing is easy, what’s the point? What can I learn from that? It can be fun and interesting to read between the lines, to pick up clues in the text and connect them to one another. When the writing is too straightforward, making it what I consider to be “easy,” it loses that sense of nuance. It’s tough to find, but when a book combines relatability, vulnerability, and artistry, it’s worth the read, no matter how difficult.

That’s what I’m talking about when I say a piece of writing is pretentious. There’s no merit in the whole point of a piece being to confuse the reader. But I believe Fun Home navigates that line without crossing it. At different points, Bechdel plays the carefree child with no regard to sexual orientation, the young lesbian putting the pieces of her sexuality together, and the older woman able to reflect on her youth with years of experience guiding her. All of this happens in tandem with her ponderings on her father’s youth and adulthood. Using literary allusions, Bechdel is able to make connections between herself and her father, and to develop her thoughts on their relationship.

The references to literature are what I have found to be the most repellent aspect of Fun Home for my friends who’ve read the book. They complain about what they see as the uppity musings of an academic, saying how it’s classist to refer to concepts the average reader doesn’t understand. Some think the literary allusions, like the references to works including Ulysses and The Portrait of a Lady, come across as forced. They believe that Bechdel invented the relevance she cites in her sources. It wasn’t there to begin with; she just wanted her writing to seem deep, and so she found ways to do that. 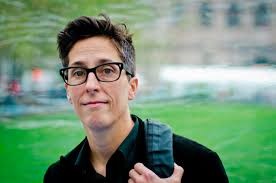 In truth, as Bechdel reveals in Fun Home, literature was one of the few ways she could connect to her father. He was an English teacher, and although Bechdel didn’t always love what she read in school, she did read quite a bit in her free time and often had discussions with her father about what they were reading. That’s a big reason why the literature references don’t come across as contrived in the book.

It’s entirely possible that the connections Bechdel makes using literature didn’t come about organically. But that just means she did work to create Fun Home. To me, that’s not a bad thing. It would become a problem if those connections were unfounded, or if they had no relation to the text, but in this case, the literature has the added significance of making up a huge part of Bechdel’s relationship with her father.

I would expect that any great piece of writing has a great deal of work on the author’s part behind it. And I don’t think it would be too much of the author to ask their reader to do their own work as well, to give their memories and their connections and their story a chance. A piece like Fun Home is well worth the effort.