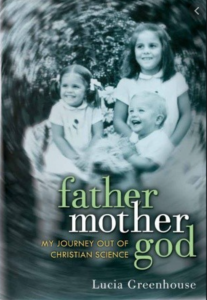 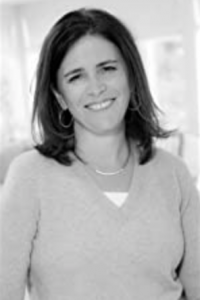 Lucia Greenhouse is the author of the book fathermothergod: My Journey Out of Christian Science. The mother of five resides in my hometown of Stonington, Connecticut, and I was privileged to be able to speak with her about her book. In her powerful and compelling narrative of her life in Christian Science, Lucia narrates her childhood, her decision to leave the religion, and the horribly complicated and saddening loss of her mother to cancer, along with much more. It was a book that was almost impossible to put down, and outlines the complexities of religion, family, and individual strength.

What has been the most meaningful part about sharing your story?

Most gratifying for me was how the timing of fathermothergod’s publication in 2011 coincided with the advent of social media. Suddenly there was a way for others to share their own experiences-many far more hellish than mine-and help each other recover from trauma. (We former Christian Scientists as a demographic are –almost by definition—extremely naïve about medicine and mental health, and very fearful. And, not surprisingly, many of us get diagnosed with PTSD.) Had I published fathermothergod even five years earlier, these online communities would certainly have formed, but being part of others’ journeys to recovery has been very rewarding.

Many of the events you wrote about were extremely traumatic. Was there a silver lining in being able to articulate these events in your own words?

Yes and no. Before that silver lining, so to speak, there was a lot of post traumatic revisiting to go through. And that was very difficult. At one point towards the end of writing the final draft, I holed up in a house on my own (Stonington!) and worked around the clock, taking short breaks to sleep and eat. There’s a term called “flooding” in PTSD, where one re-experiences trauma. It’s also actually a form of therapy in which the patient becomes desensitized by repeatedly revisiting a traumatic experience. Anyway, there was some of that to contend with. The effect was to make the memories less painful, but revisiting the events of that year, 1986, prompted a flooding response. But in order to articulate my experience, I had to re-feel it.

Was the feedback you received from publishing your story what you expected? Was it better or worse?

The feedback was in general very positive. From people raised in Christian Science who left the religion, or were in the process of leaving, the response was overwhelmingly positive. I also got feedback from people raised in other controlling religions and belief systems — ranging from Hasidic Jews in Brooklyn to Scientologists to Christian fundamentalists and Mormons. By contrast, the response from current Christian Scientists was sometimes very nasty. The Christian Science Church itself is very savvy in matters of publicity. They wisely ignored fathermothergod entirely. (Which is too bad because I suppose a response might have boosted sales!)

I know it was difficult to let your extended family know you were publishing this story, but was there anything else particularly difficult about the writing/publishing process for you?

Let’s see. I didn’t really like the self-promotional aspect of publishing. An author is expected now more than ever to really work social media and that just never felt good! Aside from that, the reality of publishing was far less scary than anticipating it. There is one small exception to that, and something that I hadn’t really considered. The book did relatively well with regards to sales, but in my hometown a lot of people read it. The local bookstore, the local library, were both extremely supportive in promoting it, etc. The net effect of that, was a little weird in one respect.  Because fathermothergod is a memoir, over time I realized that a lot of people in my hometown knew some deeply personal things about me (or, at least about the first half of my life) while I knew virtually nothing about them unless they were friends, so there became and exists, even now, a weird lopsidedness sometimes to seeing or meeting people (just in my town.) Sometimes that lopsidedness is nothing more than a little bit of paranoia. I’m not sure if I’m articulating this well. Maybe the best way to put it is, sometimes I do Skype sessions with book groups, and if those groups are in Omaha or Boise or where ever, I am totally comfortable being completely candid.  But if I’m meeting with a local book group, I feel a little, I don’t know—squirmy?

How do you think Christian Science has affected your worldview today? Are there parts you’re still appreciative of?

Hmmm. I’m having to think about this question still, but I know you have a deadline! I would say—I have always loved singing in churches. And there is something about Christian Science that is very optimistic (when it isn’t a distortion of reality.) I think in part because of Christian Science, I never felt limited by anything like measures of IQ or potential because I was taught from very early on that there were no limits to what I could accomplish. That probably served me well on some level. (I’m not sure this is strictly attributable to Christian Science.)

But I’m answering these questions within the bubble of Covid-19. Again, I don’t know if this is because of Christian Science, or because of being raised in any religion, and then rejecting it, but I do find that I am feeling more spiritual now than ever before. I find myself praying (but not in a C.S. way). Every night I pray for my immediate and extended family, our healthcare workers, our grocery store workers, the UPS guys, and people who are sick. We are now saying grace before dinner every night—something we haven’t done in years but maybe that’s not so much a legacy of Christian Science as it is where we all are right now. Oddly, though, in the first few weeks of this sheltering-in-place era, certain unwelcome Christian Science phrases were flooding my thinking again—in that PTSD sort of way. For example, I hadn’t thought about the Scientific Statement of Being for decades and it just returned with a vengeance—couldn’t get it out of my head, which was weird. Just over and over and over, “there is no life, truth intelligence or substance in matter….” (Just to jog your memory, the Scientific Statement of Being is a mantra of sorts, kind of like the Christian Science version of the Holy Rosary.

Did leaving Christian Science affect you in a way that you did not foresee?

Is there anything you wish you had included in your book looking back on it that you would want your readers to know?

Having gotten feedback from readers, I think my relationship with my sister, and her relationship with the Christian Science church, probably wasn’t made clear enough. Some readers understood (incorrectly) that Olivia remained a Christian Scientist, which she did not. I felt that in writing my story I wanted to shield my sister, and others, from scrutiny, so maybe I erred by not writing with enough clarity and precision in this.

Also, there was one thing my mother’s brother (my uncle Jack) was very upset about, and that is, that I did not mention in fathermothergod that there was no autopsy. I remember feeling badly about this, but also confused by it. In discussing this with my mother’s two sisters (Aunt Kay and Aunt Mary) they believed that he was very very angry about his sister’s illness and death and Christian Science as a whole, and focused that anger on the lack of an autopsy. Both aunts reminded me, probably to assuage my worry on this, that there had been two surgeries within a month, as well as hundreds of pages of doctors and nurses evaluations, lab results, etc, and so there really were no surprises as to what had happened to my mother.

Vice versa, is there anything you wish you had excluded?

Lol — sometimes I wish, for parenting reasons, that I had left out any references to having smoked pot with my brother. But it was germane to the story…. my editor felt it had to be left in, and I think she was probably right.

For other people who are timid to share their personal story, do you have any advice?

I am all for people coming to terms with their stories, their families’ stories, and if they have a story to tell, there are probably people who will benefit from hearing it.  If you can wait until some people are no longer among the living, it can be easier….

Would you ever want your book to be made into a movie? If so, who would you want to play some of the roles?

So funny you should ask that! I have not wanted fathermothergod to be made into a movie. I was approached around the pub date, but I never really considered it for two reasons. One, in book form, I retain total control over content and portrayal (aside from editor’s suggestions which didn’t compromise my telling.) I would have to relinquish that control upon selling the movie rights.  Two, I didn’t think it would be fair to my extended family.  It is one thing to be depicted in a book (someone has to go to the trouble of reading it!) it is another thing entirely to be depicted in film. To some extent the exposure forces one to relive the whole thing, and I didn’t want to do that to certain members of my family.  Recently, my daughter has been working on a screenplay of fathermothergod with the understanding that I reserve the right to give input,  and also reserve the right to not have her shop it if I’m not ok with it.  (Kind of turns the whole exercise into a fool’s errand for her but she has been very accommodating, and I haven’t read any of it yet!)

On the topic of fantasy cast, for a while Ellie and I would discuss it just for fun, but the picks have changed over the years as the story gets older, as do the actors!)

Your book for me not only represented an extremely difficult religious situation, but also showed how you and your siblings were forced to face extreme situations at a young age. Is there any advice you have for other young people who are living through difficult times that are out of their control?

I am a firm believer in therapy. I could add to this, but it might sound preachy to someone reading this, so I’ll leave it at that! Well, one more thing. Trying to live a life of moderation is pretty key, too. Without it, it is hard to make any strides toward recovery from a traumatic experience; it just gets buried. Ok, two more things – finding a creative outlet can be really helpful. And… walking is a great  meditative practice.