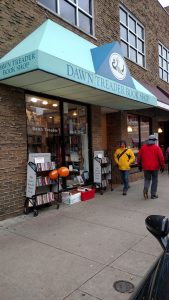 In 1979, the Dawn Treader Bookshop planted its humble roots in a basement down East Liberty Street in Ann Arbor. There, the founder and present-day owner Bill Gilmore sold the books he’d owned. The business expanded from Gilmore selling books to taking in books, and over time Dawn Treader migrated across the street into its own street-level building, becoming a local used bookstore that’s just a five minutes’ walk from the University of Michigan’s campus.

Dawn Treader has a collection of 70,000 books and counting. Walking through the store, one can see stacks of books on the floors and browse through crowded aisles alphabetized by diligent staff members. These books range from 21st century politics to paperback science fiction novels, but regardless, Dawn Treader carries something for anyone who loves to read.

“Mostly I’m a mystery and a science fiction person. I’ve tried to expand my literary horizons a little bit because people come to the store and they’re just so happy [because] everyone wants to talk about the book[s they’re reading],” said Christopher Black, an employee of Dawn Treader.  Black has been working at Dawn Treader for decades, and prior to becoming an employee there, was a loyal customer since his high school days.

The age demographic of the book store might be surprising. Black stated that it’s common for university students to come through and drop off their books once the semester is over. “Actually, we get a lot of young people in here, which I’m happy about,” he said.  “I’m surprised and amazingly optimistic to see people your age come and walk in the door and [saying] —” here Black mimicked the idea of smelling the atmosphere, “‘Ah, I just love the smell of old books’.” 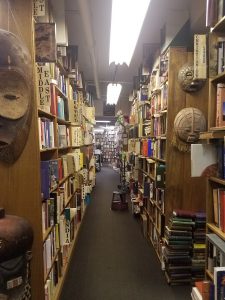 In an age where digital reading is creeping further into the market, the idea of used books might seem like a foreign concept or outright obsolete to some, though Black disagreed. “From what I’ve heard and read, e-books haven’t taken off like they thought that they were going to. It certainly hasn’t killed off regular book publishing.”  E-books tend to run at a lower retail price than printed books, but indeed physical books still outrun digital ones. Though there’s the fact of mom-and-pop bookshops dealing with online powerhouses like Amazon, where many college students — myself included — buy books for the rapid delivery and cheaper prices, something which Black considered a “soulless” process. “It’s like we’re trading away more fulfilling experiences for something that’s just easier,” he argued.

That is part of the charm that Dawn Treader holds. While one can still preview a book for free when shopping online, there’s also the choice to flip through the physical pages of a novel in a bookstore or inhaling the scent of a novel, new or used.  Black and I touched on the topic that online shopping also doesn’t grant people the chance of bumping into fellow book-shoppers and “striking up a conversation with them and them recommending something–which is better than an algorithm,” Black added in a whisper. “Actual human contact.”

Dawn Treader also sells tote bags for merchandise, which can be useful for carrying a hefty load of books home.  Need to sell some books?  Dawn Treader is happy to buy books from people who want to give books a new home, whether it’s a childhood novel you’ve outgrown or a business student finished with their class for the semester.

In terms of pricing Dawn Treader’s books, Black admitted that “it can be a lot of things.” Namely, the worker who is handling the book and their potential attachment to the author.  Ultimately customers will find a book knocked down a few dollars from its original pricing, as well as gain the memories of stepping foot in a hidden gem like the Dawn Treader Bookshop.