“Memory is a funny thing. When I was in the scene, I hardly paid it any mind. I never stopped to think of it as something that would make a lasting impression, certainly never imagined that eighteen years later I would recall it in such detail. I didn’t give a damn about the scenery that day. I was thinking about myself. I was thinking about the beautiful girl walking next to me. I was thinking about the two of us together, and then about myself again. It was the age, that time of life when every sight, every feeling, every thought came back, like a boomerang, to me. And worse, I was in love. Love with complications. The scenery was the last thing on my mind.” 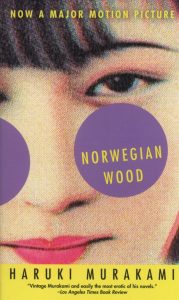 I don’t usually read books like Norwegian Wood. I’d been wanting to become acquainted with Haruki Murakami novels for a while — 1Q84, Kafka On the Shore — and it happened that my library had a copy of Norwegian Wood. I’d heard that it was a good novel, so I figured, “What the heck, let’s see what you got, Murakami” and picked it up.

Norwegian Wood is set in Japan during the late 1960s/early 1970s, and follows a young man named Toru Watanabe, a university student living in Tokyo following the suicide of his only friend in high school, Kizuki. Another prominent character throughout the novel is Naoko, Kizuki’s girlfriend. It is through Kizuki’s death that Toru and Naoko are connected and begin to find solace with each other, despite each character carrying their own baggage.

To be honest, the plot of Norwegian Wood sounds mundane and simple when I try to describe it, so it might feel like a cop-out to say the novel embodies life itself. Many scenes are comprised of Toru going to class, working, speaking with people, and having various sexual encounters. Toru’s life is by no means extraordinary nor does he possess traditional hero qualities of being valiant or supremely intelligent. But there’s something very human about this novel that gives Norwegian Wood its charm. Murakami’s voice is definitely the influence behind this; I found his subtle but precise choice of words and the nonchalant quality of his characters endearing, and at times even laughed aloud, despite the novel being a far cry from a comedy.

“The dead will always be dead, but we have to go on living.”

While Norwegian Wood is set in the past — not just in regards to our time, but also middle-aged Toru reflecting on his youth — the questions and themes it raises are timeless ones that affect anyone no matter where they live: who will we lose in our life? Who will you love and surround yourself with?  How will I live my life, but also how will I cope when I see others’ lives end?

Toru grapples with all of these questions during his university years, so arguably this is a coming of age novel, though I’d also classify it to be New Adult/Realistic Fiction. As a college student myself, I could identify with much of what Murakmai was bringing to the table, the idea of loss and pain and recovery and — a stage many people don’t like to acknowledge — relapse. Whether it’s witnessing others spiral out of control, despite loving them, or failing your expectations.

I wouldn’t go so far as to say any of these characters are likeable, per se, but they felt like realistic people. There’s Toru, of course, who is much to himself but reflective of the world around him and the people encompassing it. He carries a quiet energy, which I thought made him a suitable lead. There’s the mysterious Naoko, the girl whose past overlaps with Toru’s, and the girl that more or less is Toru’s love-interest throughout the novel. I don’t at all believe Murakami wrote Toru and Naoko’s relationship to embody a healthy one, but to indicate how mental health takes its toll a relationship, the stress and pain of seeing someone, namely Naoko, become unstable.

But there’s also Midori, who can function as a foil to Naoko. While Naoko is elusive, Midori is a brash university student attending the same school as Toru, who takes a liking to him.  There’s Reiko Ishida, Naoko’s roommate whom Toru comes to meet later in the novel. Other side-characters gave the novel some flavor, such as Toru’s odd roommate whom he nicknames “Stormtrooper,” Nagasawa, Toru’s arrogant and rich university friend. No character felt like a throwaway nor an afterthought. I think with each character, they helped carry the idea of the masks we might put up to other people, whether it’s a mask of arrogance or competence or innocence. Everyone has a past, a skeleton or two in their closet that they’ll only reveal to those whom they feel safe enough to feel vulnerable around.

For a while, I’d questioned why this novel is titled Norwegian Wood, after the Beatles song. It’s mentioned only once in the beginning in the novel, and out of curiosity I looked up the lyrics. I definitely think this song ties into Toru and Naoko’s relationship and bittersweet/melancholic melody of the novel. Music itself plays a prominent theme throughout the novel, with constant song references from Toru, and even Toru working at a record store. I think the reason for music being such a big theme throughout Norwegian Wood is that music is timeless. Different generations can resonate with different sounds and lyrics, and music is something we may listen to cope, to bury ourselves away from reality, even if just for a minute. Music can also be a transformative process, one song can move us or make us remember bittersweet and painful times.

Really, my main gripe with the novel is how it ends. Not to spoil it, though it didn’t quite feel like an ending to me. As I reflect on Norwegian Wood, however, I’m beginning to think more and more that this “open” ending of sorts was Murakami’s point. That life itself has no ending or our endings aren’t so conclusive. I am curious about the progression of Toru from university to his adult self looking back on his memories, but that will always remain a mystery. I think it’s fitting, as with the people we meet in our lives, we don’t know every detail of their story.

Is this my favorite book?  Not necessarily, though I’d recommend others to read it. The messages in this book aren’t necessarily easy pills to swallow, so if you’re intending for a happy-go-lucky read, then I’d probably skip  Norwegian Wood. It’s the type of book I wouldn’t reread, but it’s a novel that made me ponder or revisit plenty of fundamental questions. Bottom line, we will lose the people we love, friends and lovers will fall out of our lives, and there will be mistakes we make in our lives or watch others make towards other people that we won’t be able to rewrite, because that’s the power of time. It can only go forward, not back. The characters interacting with each other are nostalgic, they do recount the times that made them to be the person they are today. And that journey of transformation isn’t easy, but reading about it made these characters visceral. I am definitely still interested in reading more of Murakami’s work, as I think his writing is beautiful and something to cherish.