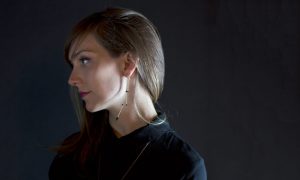 In fiction writing, there are many ways to fail. At least that’s what author Catherine Lacey knows to be true. An author of four novels and a short story collection, Lacey will admittedly tell you she’s struggled with her own writing, particularly with finding a space where she can exist outside her own self and take on the mind of her characters. Despite the struggles she’s faced, Lacey has made a name for herself in the world of fiction, appearing on the New Yorker’s list for best books of 2014, and has her work translated into five different languages. Lacey visited  the University of Michigan as part of the Zell Visiting Writers Series, a program offered through the Helen Zell Writers’ Program that brings prestigious authors and poets to speak to students. Lacey read from one of her short story collection Certain American States and lead a lecture on “where fiction comes from and where it goes.”

In her lecture, Lacey emphasized the unpredictability of writing, attesting to the ways fiction authors often aim for a particular target, but their best work comes from hitting something adjacent to that. She believes creative writing comes from mistakes and that it’s crucial for fiction writers to pursue “impossible projects” — fiction that aims to answer questions we don’t have clear answers to — so they can make mistakes that will shape their future work.

Lacey also described self-delusion and its value to creative writers. According to Lacey, self-delusion is essential to fiction writers because when you break it down, writers are simply readers looking for the book they want to read and in order to create that book, they need to temporarily lose themselves in the story to make their fictional world come alive.

Lacey got to showcase how she’s implemented these strategies into her own work during a brief reading from her collection of short stories, Certain American States. The collection depicts “Americans tortured by the mundanity of their lives,” and Lacey shared what that looks like with her reading of the story “Because You Have To.” The piece reads as a series of diary entries from a narrator who’s coping with loneliness after being left by someone she loved. Lacey strings the narrator’s thoughts in a sequence of drawn-out sentences with occasional brief, snappy phrases that plug in bits of humor or the narrator’s sudden change of thought.

In her lecture, Lacey claimed good fiction “doesn’t tell you how to read it,” meaning a compelling story doesn’t guide its readers to conclusions but prompts them with questions that they can carry with them throughout the story. Lacey beautifully implements this technique into her own writing, asking “how long does an event stay in a room?” after her narrator finds out her landlord’s six-year-old son was being molested by her ex-husband. “Because You Have To” also showcases Lacey’s attention to detail. While the narrator is reflecting on the bad behavior of her dog, she mentions the smell of mildew on the quilt she’s been sleeping with outside and takes time to notice that the mice in her yard are gone. It’s in these details where we can feel the tension between the monotony of the narrator’s life and the void of loneliness she feels that seems larger than the life she’s living.

Catherine Lacey’s writing style is refreshing in its honesty and fearless approach to developing voice and asking tough questions, something we don’t see often fiction writing.  Lacey has clearly grappled with the question of what makes a good story, and her emphasis on learning from mistakes and allowing writing to be messy is a message of hope to writers who struggle with achieving perfection in their work.