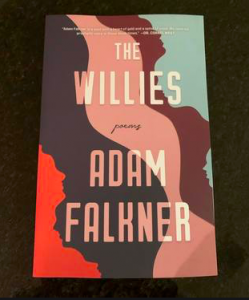 Tuesday, February 18th, Ann Arbor native Adam Falkner appeared at a poetry reading at downtown bookstore Literati. The poems performed came from his first full-length collection The Willies, published just a few weeks ago by independent publisher Button Poetry. Falkner, who now lives in New York City, did a series of readings while visiting his old hometown. The readings took place at a local youth center,The Neutral Zone, and Falkner’s old high school, Pioneer, with Literati being the last stop on his itinerary.

Tucked above a freezing street corner was a bubble of warmth created by the audience of about sixty people, all crammed together in Literati’s second-floor coffee bar. The listeners were varied, with folding chairs filled by Falkner’s family and friends, and high school students who had heard him speak earlier in the week milling around the back. Pioneer English teacher Jeff Kass was also present; Falkner credits him as the one who “gave me permission to meet all my selves.”
This idea of separate selves was the theme of the night. When introducing Falkner, Literati employee Bennet Johnson told of how reading The Willies felt like someone whispering to him; someone helping him find multiple versions of himself throughout the poems. This should come as no surprise considering the subject matter. Falkner’s collection is, at its core, a coming-out story. However, alongside the “journey into queerhood” are narratives about a white boy who wishes he were anything but, what it’s like to be the child of an addict, and, according to the Button Poetry website, the “costumes we use to hide legacies of toxic masculinity.”
Falkner spoke at length about the costumes we wear to run from ourselves and how we can harm everyone around us by never fully removing the disguise. But, quoting his belief that one should always “write just a little more courageous than [their] lived life,” Falkner said that this book is a way to stop hiding from his past selves. Instead, he’s putting them on full display.
There was no hiding in the bookstore that night. Speaking of “public accountability,” Falkner led the audience in a sing-along that led into his first poem (he then mentioned he is currently working on a musical about the “trauma and humor” of masculinity—he certainly has the voice for it). Later in the night, he used the audience again, giving a volunteer a copy of the poem he was reading so she could follow along and “make sure [he] had it memorized.” His efforts were effective, and as Falkner read about everything from raceto the Wu-Tang Clanto how “Jonathan Taylor Thomas made [him] gay,” the audience leaned into the sense of community being created.
In the short Q&A following the reading, Falkner expanded more on his concepts of costumes and multiple selves. He reiteratedthat growing up,he felt like he was wearing different costumes around different groups of friends. Even today, he said, “everyone knows me by a different town.” However, he also added that this acknowledgement of the different versions of ourselves we all hold is what keeps him making art. It’s “telling your truth and growing closer to the people you love” that makes him excited to write. When asked how he feels about his past selves now, Falkner’s answer was simple: he loves them. He sees every self portrayed in his book, every voice “adjacent to an emotional truth that is exact,” as a stepping stone to where heis now. As the night drew to a close, Falkner told the audience to remember that the costumes we all wear are not things we once chose for ourselves, but rather what was needed along the “path of least resistance towards the ability to survive.” That’s how he sees his book, an ode to who we become when trying to survive. He hopes we all learn how to be kind and gracious to the people we used to be, who were just doing the best they could with the tools they were given.
Scroll Up