There has been one class that has particularly stuck with me through my past two and half years at the University of Michigan. As an incoming freshman during my fall semester, I took the English 371 (Contemporary Immigration Stories). It became a course that resonated with me far past the end of the semester, and is still one that I think back on frequently. I learned what it meant to become an American and the struggles that all American lineages have faced at one point or another in becoming a part of this country.

The course weaves together an array of novels written about modern immigration stories to support the class discussions on the struggles of moving to a new place, joining a new culture, and leaving who you once were behind. The semester I took the course, I was able to read Yaa Gyas’s Homegoing, Laila Lalami’s Moor’s Account, Mohsin Hamid’s Exit West, amongst many other exceptional titles that were both insightful as well as deeply moving. As immigration has become a popular topic in our current events, reading recently published accounts of immigration experiences allowed me to gain a new perspective on many of the modern issues we as a society are facing. The major assignments of the course gave each student the chance to research their own personal immigration story and write two chapters of their own lineage; whether it was the students first generation story, or one that happened to our ancestors. The process of writing these pieces allowed the class to examine the similarities that each and every student’s families had faced at one point or another and connected us in a way that is rare to discover in a college classroom.

The class is taught by English Professor, Michael Byers, who has been teaching the course since 2006. When he first introduced the course, it was during a time of post-9/11 paranoia, as well as current Iraq war tensions. He spoke about how over the fourteen years he has taught the class, the syllabus has changed each time regarding which novels were taught, as well as what discussions needed more emphasis than others. He believes that the course is able to connect English with History as well as Creative Writing, to truly draw upon the lessons of his teachings. The class is taught with open discussion, allowing every student to add their own personal opinions in a comfortable and safe environment. Mr. Byers hopes this course will teach students that whatever their story may be, someone else shares it with them. He believes that even though a student may not think the subject matter applies to them, it does, and one cannot opt out of this discussion.

As the 2020 presidential election ramps up, Mr. Byers is aware the course will take on a new meaning the next time it is taught. Taking this course during my Michigan experience where I was confronted with so many new people from such diverse backgrounds, educated me in ways that have been so impactful and eye-opening throughout my time here. I strongly recommend this course to all Michigan students, as it is a discussion in which we all need to take part. 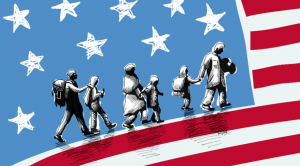