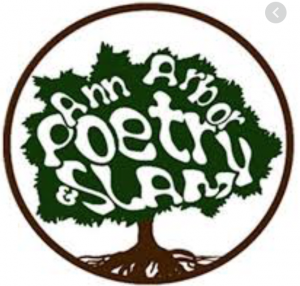 Skazat! is a gathering of poets, authors, and listeners who share personal works and readings on the fourth Tuesday of every month. Please refer to my earlier piece for more information.

Why did you decide to start Skazat!?

A series had been running in the back room of the original Sweetwaters Café for several years before we took it over.  The original hosts, Chris Lord and Esther Hurwitz, had passed the baton to another group, and when they could no longer run the show, they asked a few of us local poets if any of us would be willing to take over- Karrie and I and our friend Francine j. Harris thought it would be fun to try.

Has the show changed in the ten years since you began?

Francine moved away after our first two years, so we’ve had a few changes to our hosting trio; our good friend Ellen Stone has been co-host along with me and Karrie since 2015. But the format and energy of the show are pretty much the same as they were when we started out, with a forty-ish-minute open mic followed by a twenty-five-ish-minute feature reading by an outstanding poet we’ve invited.

Are guests usually regulars or new?

Our crowd each month tends to be a mix of regulars and new attendees, and each open mic we seem to have one or two poets who are reading at Skazat! (and in some cases, in any public forum) for the first time.

Why do you feel the Ann Arbor community values something such as Skazat! in its ten years?

This town has always had a highly literate culture; for a while in the 1990/2000s Ann Arbor had both the highest per capita book sales of any town in the U.S. and the second-longest-running poetry slam in the world. A lot of great literary events happen through the University, but it’s also healthy and refreshing to have alternatives that are out in the community, not tied to campus.  And unlike the reading series hosted by the University or by Literati bookstore (also a fantastic downtown literary hub), an open mic like Skazat! provides a very participatory poetry culture in which everyone can share their own work as well as getting to hear a variety of other voices. Our vibe is pretty welcoming and chill, so it’s a good opportunity for writers with a range of aesthetics and experiences to come together and inspire one another.

What has been your favorite part about being a part of this?

Hearing what people bring to the open mic each month. Whenever I get a little burnt out on the work it takes to keep a series like this going, the poems I get to hear during the open mic and the responses I get to see from poet to poet give me a jolt of energy that reminds me how much good can come out of a poetry community.

Have you learned anything new from being a part of this and hearing so many people’s works?

It’s good practice in being a generous listener. Every person who comes to the open mic has a story to tell, an observation to relate, a feeling they can’t shake that they want to share.

Is there anything you would want to say to a UM student who has not attended a Skazat! show before?

We’d love to have you join us – there’s usually an open spot or two on our open mic list and our audience is warm and enthusiastic. If you walk the several blocks down from campus, we promise you’ll get a good reception if you choose to share your work, and either way you’ll get to hear a fabulous range of poems, and the tea and pastries at Sweetwaters are hard to beat.

Skazat! had their most recent show on Tuesday, February 25th, with Laura Apol as the featured reader. Due to the weather and midterm schedule, the show was a smaller crowd than usual, which led to a more intimate reading around the tables together. Laura Apol delighted the guests with some of her poems including “Light, Water, Bones” and “The Lives of Others.” Her readings were a true delight for the people in attendance, and led to a cozy evening during the chilly week in Ann Arbor.