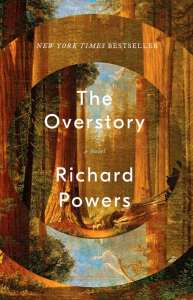 “The best arguments in the world won’t change a person’s mind. The only thing that can do that is a good story.”

Richard Powers’ novel, Overstory, does exactly this. He makes it nearly impossible to leave this book feeling the same as you did before. He taps into questions and truths far bigger than I had anticipated, and connects us to something far greater than ourselves, and our species in general. How is he able to do this? He explains the trees.

On the first page of his book, he lists off a multitude of different trees and which each one tells us in “words before words.” Powers explains the interconnectedness of natures and trees, and taps into the larger truths of nature that we as humans have pardoned. He begins with laying out the root problem: humans lack of acknowledgement of everything going on behind the scenes that has allowed us and so many other species to exist. It is then he writes, “there’s something you need to hear,” and thus begins Richard Powers’ novel.

Power weaves together nine characters’ personal stories to show the relatable struggles of human existence, and the comfort, purpose, and understanding they receive through their relationship with trees. The book clearly emphasizes the real-life issue regarding deforestation, climate change, and industrial advancement. It is through the characters that the reader is able to see the harsh reality that these problems cause, not only for the trees, but for ourselves -almost all of the characters find themselves being a unique part of an activist group in order to protect the trees, and being on the front line of a battle that alters their lives, and in some cases, takes it. The characters provide questions, such as “what the fuck went wrong with mankind?” and led us to this dire state where our own greed and ignorance will collapse unto us. With characters ranging from a Vietnam war veteran, to a struggling artist whose family legacy was to take photos of a singular chestnut tree, to a drunk partying college student whose near death experience led her to a life of servitude to protect trees from deforestation, Power exemplifies how any person open to understanding trees becomes not only influenced by them, but changed. The novel juxtaposes the serenity of understanding within nature with the dark and daunting reality that human greed and ignorance will destroy us all. Powers entrances you, shocks you, and enlightens you as you learn with these characters one of life’s greatest truths.

Powers’ novel is beautiful and enlightening; it connects you with a deeper meaning, one more harmonic and calming. Yet, it is also deeply troubling. Through the stories, each character provides a new lens, a new subjective stance, backed by reason or feeling, you are unable to shield yourself from the reality they present; a reality in which you as the reader are apart. Very quickly you learn “(e)xponential growth inside a finite system leads to collapse.” Our earth is not fit to sustain the ways of human advancement. This isn’t a fictional problem. It is fictional characters commenting on a real-life catastrophe. Humans lack of acknowledgment to the grave threat against the climate through acts such as deforestation will do nothing but kill us all. The real kicker Powers gives is the fact that the extermination of humans as a species, however, is the most positive solution to the earth’s existence. The characters of this novel recognize this, and become martyrs for the cause. Powers’ intention is not to cloud the actuality of this situation, which our own government tends to do. No. Powers makes a clear and tenable statement that destroying the trees, and thus the environment, will only destroy us. He shows us our dependence on these species, and on nature in general. He shows us the ways in which these organisms have been standing since the days of Jesus, yet we have destroyed all, but 3%. We as humans have committed an egregious crime, one where repentance will most certainly not save us.

In a time of rapid economic and technological advancement, Powers provides us with a story that has us question what truly matters. He blinds us with the beauty of nature and of the trees, garnering a new relationship for the reader. Powers novel challenges us as the reader, we are brought along on a story that provides insight we can never give back. Power makes us question ourselves, and our societal values at large.  One character, Neelay, who is a Silicon Valley programmer, realizes that humans will never stop in attempts of Mastery, or ultimate power to put more lightly. For many people, it will always be a fight for more, leaving us all with nothing. The world’s end will mirror its beginning, and to put it simply, it is one without humans. Powers novel strips away ignorance and reveals a fight much larger than ourselves. It is a concept and a problem we all must acknowledge before it’s too late, and what better way to do that then reading a compelling story?