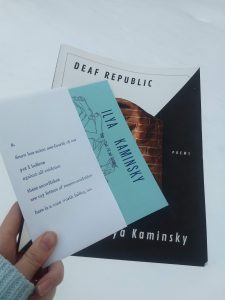 I often feel paralyzed by politics. No matter how many activists I follow on Twitter or how many protests I stop by on my way home from class, it never seems like I’m doing enough. I haven’t figured out how to balance my own mental state with the state of the headlines coming in from all around the world. I know compulsively checking for updates on the world’s current disaster is unhealthy in the long run, but what am I supposed to do with the guilt I feel if I don’t check? At what point does self-preservation cross into willful ignorance?

I don’t know how to deal with any of this, but I do know that Ilya Kaminsky’s “We Lived Happily during the War” captures my feelings of inadequacy and turns them into something guilt-ridden and beautiful. “In…our great country of money, we (forgive us) / lived happily during the war” writes Kaminsky in the last lines of the poem that begins his second poetry book, Deaf Republic. Rather than a traditional collection of various poems, Deaf Republic is more similar a Greek epic in two parts, complete with a chorus of narrators. It tells a story, one of an occupied town, the fictional Vasenka, as it protests the death of a deaf boy at the hands of a soldier. In response to the murder, the citizens of the town stop listening to the soldiers entirely. As Kaminsky writes, “in the ears of the town, snow falls.” Instead of speaking, the townspeople teach each other sign language in a desperate bid to communicate in a way the soldiers will not understand. However, throughout this protest, life goes on. Alongside poems speaking of violence and resistance is the narrative of Sonya and Alfonso, a newlywed couple at the heart of the story. Short depictions of their domestic life together are interspersed throughout Part One of the book, giving another dimension to what it means to “live happily during the war.”

I didn’t know anything about the book when I read it for the first time last year.  I didn’t know Kaminsky himself is hard of hearing, something which undoubtedly influenced the themes of Deaf Republic, or that the sign language the townspeople spoke to each other actually made a visual appearance in the book through illustrated hands. I didn’t know he was born in modern-day Ukraine and that he came to the United States at the age of sixteen as a refugee. I only knew that a poetry blog I followed had started posting excerpts from some of the more political poems at a time I was looking for something to grasp onto as it felt like the world fell apart on the president’s Twitter account. Despite my lack of background going in, because I felt so lost floating through our current political landscape, the book meant something to me. It made me question exactly how I was spending my time and using the privilege I have as a white American. Was I who Kaminsky was speaking to when he wrote “I was in my bed. Around my bed America was falling”? Apparently, these questions resonated with other people as well; Deaf Republic was the winner of the National Jewish Book Award for Poetry this year, as well as a finalist in the 2019 National Book Awards in Poetry.

Kaminsky’s book deals not with the idea of silence, but rather what we hear. While the line between these two concepts may seem muddy at times, the difference is vital. As Kaminsky writes, “The deaf don’t believe in silence. Silence is the invention of the hearing.” In a town occupied by soldiers, deafness becomes the “only barricade” on which protest is possible. Even the noise of violence is cut out一 the shot that turns the town deaf is referred to only as “the sound we do not hear.” Outside of this idea of literal silence, however, Kaminsky poses questions to the reader: What do you listen to? Whom do you hear?

As mentioned, the book’s first poem, “We Lived Happily During the War,” challenges the audience to consider their own lives and how they live them. How much must one protest injustice to feel they’ve done enough? How much do we have to listen before we actually hear? The final poem of the book, “In a Time of Peace,” echoes the same sentiment. Depictions of everyday life, like noticing blue skies and shopping for salad ingredients, are interwoven with a description of a death due to police brutality. Interspersed throughout the poem are Kaminsky’s assurances that “it is a peaceful country.” At the end of the dual story, we are told “I do not hear gunshots,” plunging the entire idea of what it really means to hear into question. In Vasenka, deafness is the only way to acknowledge the injustice that has occurred and fight against it. In this last poem, it’s implied to be a form of avoidance. “We Lived Happily During the War” and “In a Time of Peace” are the only poems in the book not set in Vasenka. They act as bookends tying the book to politics of today, asking us what we choose to pay attention to. Do we hang on to the brightness of the sky? Do we try to live “happily during the war?” Or are we meant to notice “the nakedness of the whole nation” and ask for forgiveness? These are questions Kaminsky does not answer, although perhaps his feelings on personal responsibility can be found in a poem in the middle of the book, in two simple lines from “A City Like a Guillotine Shivers on Its Way to the Neck.”

At the trial of God, we will ask: why did you allow all this?

And the answer will be an echo: why did you allow all this?

Long story short, I really like Deaf Republic. So much so, in fact, that when I discovered Ilya Kaminsky would be visiting campus as part of the Zell Visiting Writers’ Program (which you can read about [here]) last Thursday, I skipped class to go. Others may have had the same idea, for his Q&A was moved from the usual Hopwood Room to a larger conference room. The audience was still big enough to force some people to stand throughout the hour-long session.

Kaminsky was taller than I expected, and his voice softer. Speaking with an almost musical accent, Kaminsky answered questions about everything from folk tales to Russian grammar to the purpose of poetry (in his words, “to wake up the empire”). Half of the session was allocated to questions from a student moderator from the Helen Zell MFA program, and the rest was open to audience questions. Of all the topic brought up, it was a question about politics and poetry that made the biggest impact on me.

The question was something simple about the use of politics as a poetic theme. For Kaminsky, it hardly seemed like a question that needs answering. “If you speak honestly,” he said, “it’s all politics. How can it possibly be different?” Perhaps this answer should have been expected based on the entirety of Deaf Republic, but it was still oddly reassuring to hear him respond in this way. While I do think it’s possible for art to exist without being political, I enjoy knowing that there are things out there that weave beauty and politics together without either one overpowering the other. While speaking briefly about genre definition, Kaminsky said that he doesn’t set out to write in one specific style, but rather “a story you can come back to.” I believe this extends to the politics in his writing too. Maybe he didn’t know Deaf Republic would become so relevant to today’s politics when he began writing the story of a deaf town, but through speaking honestly, that’s what it became.

“Poetry is not about an event, it is an event.” This snippet from Kaminsky’s Q&A perfectly describes the reading that happened a few hours later. As the audience filed in to the UMMA’s Helmut Stern auditorium, which seemed to be near its 185-person capacity, they were presented with letterpressed cards printed with an excerpt of one of Kaminsky’s poems. The cards were made by the Wolverine Press, a letterpress owned by the Helen Zell program and operated by MFA students. Along with these cards were packets containing the Deaf Republic poems Kaminsky would be reading so the audience could follow along.

Now, I’m by no means an expert, but I have been to a fair share of poetry readings in my life. I have, however, never been to one like Kaminsky’s. He didn’t read his poems so much as sing them. His voice rose and fell, putting emphasis on words I had never thought to notice before. Line breaks seemed meaningless to him; he seemed to follow some shifting melody only he could hear. He spoke with such passion I half expected him to start pacing and gesticulating wildly. Instead, he was still, like a puppet master making strings dance without twitching more than a finger. (Puppets play a big role in Deaf Republic; I’m not just making wild metaphors here.) From my vantage point towards the back of the auditorium, the audience was completely enchanted. In my completely unbiased journalistic opinion, it was for good reason. The reading was absolutely beautiful.

Once the reading had finished, everyone went upstairs for the book signing 一 and when I say everyone, I mean everyone. The line curled around the art museum’s lobby, actually stretching back down the stairs we had just come up. As I waited in line, I thought about what I’d just experienced and how the story of Vasenka ties us to the world we live in. The Iowa caucus had happened just days before, and official results still weren’t in. I am still not sure whether there remains a threat of conflict with Iran. Is Australia still on fire, or was it the Amazon I was so worried about? If the world’s engaged in some hypothetical war in the way it so often seems to be, am I one of the people “living happily?” Should I ask for forgiveness for being able to enjoy getting someone to sign a book I paid sixteen dollars for while so many others could have used that money to buy a warm meal? Or, if Kaminsky is right, and poetry and politics are the same thing, is that reading exactly where I should have been?

With my newly signed book, I stepped out into the night and thought about the falling snow filling my ears with silence.