I took this trip alone to attend the AAA conference for the year as an undergraduate majoring in anthropology and women’s studies. Although I was not one of the many that presented at the conference, I believed that I should take this trip to learn more about where anthropological current efforts have been allocated. I was interested in the intersections of my many interests and to see how they play out in what is happening in anthropology currently. I have been interested in attending this conference since my freshman year, but I did not believe that I have the resources to be able to go. I have decided that I have wanted to go to graduate school in anthropology, therefore, I went ahead and tried my best to make attending this conference a possibility. While in D.C., I was able to attend numerous panels and roundtables that were of interest to me. One of my favorite memories while was that I could meet anthropologists and scholars whose work I have been learning about during my undergraduate career. 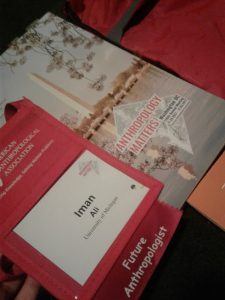 This conference was a means for me to network and also to see how diverse the work of anthropologists could be. Initially, one of my interests entering anthropology was archeology but gradually I found myself gravitating more towards sociocultural anthropology, as I was not familiar with people or professors that try to balance the two other than a select few. However, at this conference, I had the opportunity to sit on a panel that discussed the remains of enslaved Africans and contest burial grounds for indigenous peoples which allowed me to see the intersections of sociocultural anthropology and archaeology, and the possibility of archaeological justice or ensuring reparations even hundreds of years after. One of the greatest things about AAA is that I had to take a flight for 50 minutes and there I was in D.C. whereas others had to come in internationally, from countries such as China, Australia, Denmark, UAE, etc., which was a powerful thing for me to learn as an undergraduate as someone who values the importance of the field. To see people comes from so many different places and teach about their work and learn from what others are working on. I look forward to attending this conference next year in California, and writing more about it then.