This past week 12 brothers of the service fraternity, Alpha Phi Omega, had the opportunity to volunteer at the Peaceable Kingdom Retreat for Children in Killeen, Texas. Here, we were able to engage with children that ranged in physical and mental abilities. We worked with children from elementary school all the way to graduating high school seniors. When we were not with the children, we were deep cleaning the main kitchen, which had not been done in over 5 years. 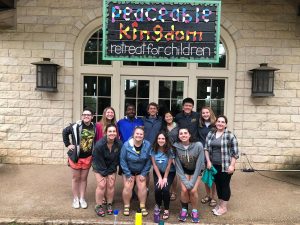 We knew that it would be difficult to quantify our the impact of our work, however, we were able to do so qualitatively. For the children we experienced firsthand how happy they were to be there. The majority of the children were reluctant to leave and while they were there, they opened up and tried new things. For one of the events we gave the children a chance to touch or hold a live snake, tortoise, and rabbit. Although many of the children were afraid to touch the snake in particular, after seeing the UM students and other students calmly touch and hold the snakes, some of the students who were scared before gave it a chance and realized that they had nothing to fear. One aspect that we did not account for was how helpful this would be for the parents and teachers of the children. Although, we saw how much energy each child had, we only engaged with them for a couple of hours. Their teachers were with them nearly everyday for months, which requires an immeasurable amount of energy and patience. We realized that we had helped relive some of the stress of the teachers by being there and actively looking after each child. The teachers were able to relax and take a little bit of a break, which they deserved. Also, we could see a considerable difference in the cleanliness of the kitchen as well, one of the counselors said that she was almost brought to tears because she had never seen it that clean, even though she had worked there for almost 6 years. Overall, I think we surpassed our initial goals because we could see and hear the impact of our work form the the children, teachers and camp staff. 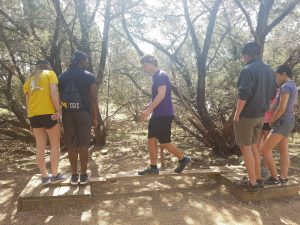 We were lucky enough to not have many challenges. One of the only ones we had was with the weather. There were supposed to be thunderstorms for the majority of the week, however, we were lucky and it did not rain heavily until our last full day. However, we had to change our plans on the last day, but it was no problem because the camp staff had various backup plans ready to go. This also tied into the development of our leadership skills as we had to think on our feet and be willing to lead any activity with confidence. Throughout the week we constantly had to volunteer to facilitate activities that we just learned and had to teach the students how to play them, while taking their abilities into consideration. I was also essential that we worked on our communication skills with each other as well as the staff and children. We did think by doing daily reflections on the “roses, buds, and thorns” of the day with the staff and other students. 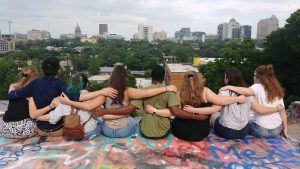 Now that we are back we intend to continue to return to the camp either as volunteers or to fill the summer camp intern position that they offered to us. We also want to continue to do  advocacy work for differently-abled people. We will also continue to offer service events through our fraternity that allow students to interact with people that may be different than them.

Additionally, we will be encouraging a new cohort of brothers to go the the camp next summer and/or apply for the internship as well.