On behalf of African Students Association (ASA), I want to deeply express my gratitude to BLI for the financial support of our 20th Annual Culture Show. The Akan word, Sankofa, which translates to, “go back and get it” was brought up by an ASA executive board member during one of the meetings, and served as a centerpiece for the theme of the show. Giselle Uwera, an ASA executive board member that served on the fashion, styling, and visuals committee for the show, described the show eloquently– “ Sankofa was a beautiful space for ASA to showcase so many different cultural aspects (fashion, dance & music) from all regions of the continent of Africa. With its theme of knowing one’s past and how it impacts one’s future, ASA told the story of a member of the African diaspora who is torn between their past, present, and future. Throughout the show, ASA’s goal was to make sure our audience followed the storyline that our [ASA] members relate to, and my favorite part was seeing the beautiful story brought to life in the form of Sankofa. ”

One way this storyline unfolded was through a fashion show. This year, there were four scenes with clothing ranging from traditional to contemporary, from different countries. Members of the styling committee were intent on highlighting as many regions of the continent as possible. This year, 30 students were models, led by our two model coordinators and ASA executive board members, Megan Manu and Sophia Akatue. Megan and Sophia were in charge of holding model calls, planning walks, and running
practices.

Megan, one of the model coordinators and ASA’s secretary, had a few words to share regarding the show– “The culture show was definitely something to look forward to. We literally built the event up from the ground. Planning and executing the event became all of the executive board’s priority, sometimes even taking importance over school work… that’s how much the culture show meant to us. But I definitely want to emphasize how amazing the show turned out and how worth it was!”

Music, dance, and Spoken Word performances expressed our theme of reflection as well. This year, we had a Rwandan Dance group one of our members used to be a part of, perform, as well as the Sun Drummers, Amala Dancers and two students, Dania Harris and Arwa Gayar, with Spoken Word pieces. All the performances contributed to a collective energy in Crisler, one that I looked forward to taking part in for the second time, this year as an executive board member of ASA.

Jeremy Kwame, a freshman who modeled in the show reflected upon the show as well– “Participating in Sankofa, this year’s edition of the University of Michigan’s African Students Association’s Annual Cultural show, was one of the highlights of my first year. There was a creative ambiance to the show which encompassed a multitude of setting and eras from traditional to more liberal and contemporary. I believe this catered towards the interests of the different generations and diasporic backgrounds present”.

The BLI Habit we utilized the most was, “Start Small”. Once we had the idea for the show, we had to contact performers, create many, many, to-do lists, contact and follow up with sponsors and performers, and finally, publicize the show! Starting small allowing us to not feel too overwhelmed, and reframed our ideas into tangible goals. For example, once we had the idea of a scene titled, “When I was,” dedicated to one’s past, we started small by collecting recordings of ASA members’ parents describing their life growing up on the continent and life lessons they had for their children. Then, our talented Arts director and Co-President, Jacklyn Thomas, cut the recordings together to serve as a background for the fashion show.

One BLI Habit we wish we could have utilized more during this experience was, “Expect Challenges”. The day of the show, that started at about 7am for some ASA members who set-up the stage at Crisler Center, there were many unforeseen challenges. One challenge included not clearly delegating people to table before the show to sell and collect tickets, as well as when to stop tabling. Many people arrived well into the show, yet we had already stopped tabling. Communication among members could have been improved as well.

Although, there were challenges, the BLI Habit “Pause and Reflect” allowed us to grow as an organization. First, we incorporated this habit within the show, by inviting past executive board members to walk with the current board in the final scene of the show. We wanted to reflect upon all the hard work previous boards have put into the organization and give these past members well-deserved recognition. Second, the next few meetings after the show were dedicated to discussing what went well, what didn’t go as planned, and how to improve for next year. Overall, we were extremely pleased with how the show came together, and are excited to see what the next executive board has in store for the 21st Annual Culture Show. 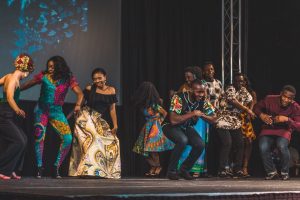