When I was younger, my mom used to warn my grade school teacher that I didn’t work well with others. I was a bossy seven year-old, and I’m sure there are people out there that would call me a bossy twenty year-old. I still don’t like group projects because they often come with vague instructions, expectations of a cohesive group, and the uncertainty of relying on people who are strangers to you. In college, the stress is worsened by trying to coordinate the chaotic schedules of group members. I wasn’t sure what I was getting into when I registered for ALA170– I definitely didn’t know it would be focused on a group project. On the first day of class, I made my priority habit to be “Build a Team” because I knew it would be a challenge for me.

It didn’t start off great. Whereas most groups left their first class with someone semblance of an idea, we left with nothing. Not even a date and time for when we would meet next. I was skeptical about how a group, comprised of four aspiring-leaders, would be able to interact in a productive way. We all had ideas and passions, which overlapped in general themes but not in the specifics that we need to develop a project idea. The night before the next day of class, we held another round of brainstorming and ended up with what would be our Plan A. 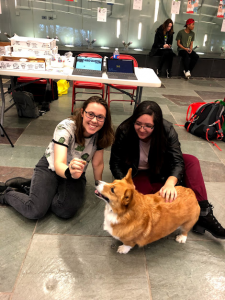 Luckily for us, Plan A was the plan we would end up executing. Spoiler Alert: We wouldn’t reach all of our goals and the project certainly didn’t happen without some stress and unexpected bumps. Unluckily for us, most of these bumps came the day of our project. In my mind, I was going to be able to carry fourteen dozen donuts across town. As I walked into Washtenaw Dairy and saw my order, I immediately started to panic. My other group members were in class, I had no car, and there was no way that I was going to be able to make it even a block away from the dairy. I quickly called an Uber and was rescued by a lovely driver named Janet. We filled the backseat of her car with boxes of donuts and made it to my next location with plenty of time to spare.

The next challenge was transporting the donuts over the course of the next hour to
where other supplies had to be picked up. I was still alone, waiting for my group members to join me. I went to Angell Hall, my arms stacked high with donuts, and found a spare cart in an astronomy lab. Then I made the mistake of shutting the door on my way out. I had just stolen the cart and now returning it would be a challenge. On my way to meet Noah to pick up the next round of supplies, I called a friend with access to the lab and explained my predicament. He promised to be there in an hour to help me return the cart– the problem was solved. Once we were set up at Haven Hall, everything was smooth sailing. I calmed down from my initial donut-induced panic, enjoying the time with my group as we handed out donuts in exchange for survey responses. We even got to take our picture with Reggie! 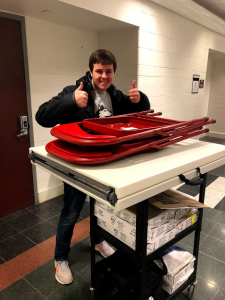 Although we didn’t reach our goal of 200 survey responses, we gained valuable feedback and I learned that no matter how much you plan, you still have to expect the unexpected. Reflecting back on the last six weeks with my group, I realize I’ve just gotten started
with the habit of “Build a Team”. It took sitting at a table for two hours with my team to learn that they are really into the Marvel movies. I also learned that with any project, your team also includes your community and stakeholders. Without my Uber driver Janet, I would have struggled to carry 14 dozen donuts from Washtenaw Dairy to Haven Hall. Without my friends in the Astronomy department, I wouldn’t have been able to borrow the cart that helped us make it to the Posting Wall in time. By engaging with Wolverine Wellness and the Central Student Government’s Mental Health Task-force, I learned that many of the resources offered to students on campus are student-driven and student-developed. And without Noah, Elva, and Leo, I don’t think I would have been able to say that I, with my horrible history with group projects, truly enjoyed working with my team.