Over 70 students gathered in Mason Hall on the night of Tuesday, November 8 for Pizza and Politics, an event hosted by the Public Activities Committee of LSA Student Government and made possible by grants from the Barger Leadership Institute, the Department of Statistics, and the Department of Political Science. 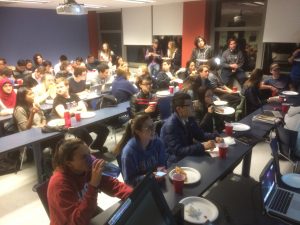 This was a particularly long and trying election season for many, especially for most students – who were having their first chance to vote in a presidential election. A long and vitriolic campaign was a source of frustration and exhaustion, and we aimed to host this event with the goal of bringing closure to the over one-year election cycle, and also provide a space for students to think about becoming more politically engaged in the future. As we all know, civic engagement does not begin or end with a presidential vote. State and local governments are often just as influential in the daily lives of many citizens, and voting too is just one component of a healthy and productive democracy. We hoped to spark conversations and get to students to think about the policy future of this country and how they may be involved in it.

BLI funding made it possible for us to provide a convenient, fun, and nonpartisan space for University of Michigan students to watch the election results and enjoy some pizza. Folks started arriving 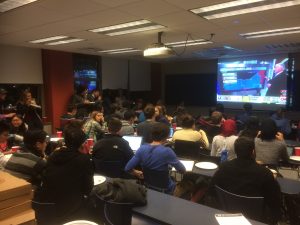 just before 8:00 pm and the room quickly began to fill up after that. At the peak, we were standing-room-only as can be seen in the pictures included. Students were discussing the results and making predictions, and the room would fluctuate from a roar of conversation to a hushed silence when a projection was being announced on TV.

It was clear that we achieved our goals for this event. Students really enjoyed the space that we created to take a break, have a slice (or three) of pizza, and watch the results. In a survey of 36 attendees, the average attendee rated the event a 4.42 on a 5 point scale. On the question of whether or not attendees felt inspired to be more politically engaged, the average response was 3.97 on a 5 point scale. Some of the qualitative feedback we got included “fun environment,” “loved it!” and “I like the idea of screening important political coverage because I do not have cable.” We also saw feedback that we might have gotten a bigger room and used closed captions on the results since the room was so full and loud. This was great to hear! We expected a solid turnout, but I was surprised to see the room fill up so quickly. We sincerely thank the Barger Leadership Institute and our Department sponsors for making this event possible.