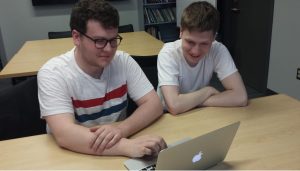 It has been quite an honor to participate in the BLI’s inaugural Senior Capstone Project. Suffice to say, the Capstone has been equal parts more than we could imagine and also what you would expect. It’s been a long and at times arduous process, but also the most meaningful thing either of us has done. Throughout the project, our inspiration has remained consistent: we wanted to create something about video games, a longtime passion of ours, and the people who play them. Yet there is indeed a duality of our inspiration: while we wanted to make a game about video game communities, we were more so motivated to critique this culture in terms of its social issues, particularly gender. The project, which would eventually take the name JUXT, has been a highly creative endeavor, and it forced both of us to evaluate our skills and also our limitations.

The initial phase of our project was research. We studied online video gaming communities to better understand how gamers talk about gender. This was a step out of our comfort zone; we had no previous experience with analyzing raw data. Fortunately, we built a sustainable research plan and recruited a research partner to help along the way. After research, we began the game development phase. We started by building a team, as we alone did not possess the expertise needed to make a fully functioning game – even a small one. After a lengthy hiring process, we found a programmer and an audio producer to help realize our vision. We divided the roles of writer and artist between ourselves and designed the game together. Throughout the fall and winter semesters we worked to complete the game, and as of the end of this winter semester, we have a finished game.

The best advice we can give to our peers in the BLI and future members is to expect challenges. Any creative project has ups and downs: writer’s block, miscommunication, and juggling the Capstone with other priorities are a sample of pitfalls we had to maneuver. However, as in all projects, it is valuable to be wary of challenges rather than to fear them, and always be ready to find a solution. Working as creators rather than consumers was a difficult adjustment, for example. We were often tasked with re-evaluating our project’s scope, timeline, and organization. 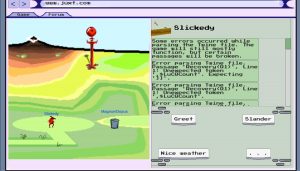 inhibit creative growth. Even for a confident team, starting small almost always yields positive results. In hindsight, we may have looked too much at the big picture while ignoring our considerable “small wins.” At each meeting, we would address many facets that need to be completed, while ignoring the value of what we had already accomplished. This could be due to our inexperience in game design, always wanting to improve upon what was laid out. We now have an appreciation for every step, no matter how minute, in any project setting.

Finally, we think our project has shown the value of working to learn, as our team was able to craft an experience, unlike anything we had ever done before. Much of the creative process was spent on first tries, and while that may be another kind of challenge, it offered a freedom from “absolute” statements (i.e., “This should be this way,” “Our game needs to have this,” etc.) In the conceptual stage, such statements heavily informed our thinking. It wasn’t until we got into our specialized zones that we could actually see how the pieces would come together. It forced us to communicate clearly, revisit our work, and critically examine each part to make sure we were reaching our goals. While our work may have changed a lot from initial concept to final product, our vision was never compromised by lack of experience. Not only are we proud to have worked on the BLI Senior Capstone, but it has invigorated our passion for meaningful creative projects and imparted invaluable perspective on what it takes to complete long-term projects.