Three BLI Leadership Habits that guided our project were “Start Small,” “Build a Team,” and “Collect, Combine, Create.” Initially, we found that it was difficult to find a project that was small enough to have a big impact on the community. Once we completely changed our project, we were able to better collect our thoughts, combine as a team, and create a project that would benefit the student population. In our weekly meetings, we welcomed new ideas and combined our visions of a successful project. Finally, we were able to build a team, not only within our immediate group, but the community at large. We partnered with Expect Respect to develop a project that increased awareness on what a bias incident is and how to report it. 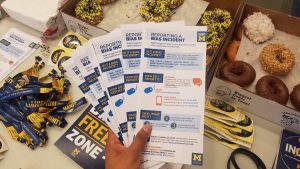 One of the biggest challenges that we faced was that our issue was quite broad, and knowing our time and resources were a bit limited, we needed to rethink our initial idea. Thus, we opted to develop a plan in which a meaningful impact can be made but just executed on a smaller scale. Since our initial plan was ambitious, we realized this soon enough and reconstructed our project idea to better meet the expectations set for us. As mentioned in the BLI habits that were exercised, we focused on starting small and developing a more realistic perspective to tackle the issue at hand, which was the lack of exposure to reporting bias incidents. After our event, this method proved to be successful as we were able to gather a significant amount of people to come by and grab a donut while learning how to report bias incidents!

Our team included people from three out of the four grade levels, and all different experiences at the University of Michigan. Our team really succeeded in collaborating because we are able to combine our different perspectives, and contribute each of our individual vision for what this project should look like, to make an end product we will all proud of. When we began working, we all had different ideas of what this project should look like, but by taking the time during our meeting to describe what we wanted to get out of this experience, we were able to make sure everyone’s ideas were equally represented. Other than that, everyone in our group were just kind to one another. The respect each member of the group gave to each other was part of the reason why our group had such an accepting climate: it was very comfortable to contribute new ideas. As opposed to what our group succeeded in, the primary area where our group struggled was finding a good time for us all to meet. It was really hard to all meet up at the same time since we had time-conflicting prior commitments. We ended up making it work in the end though by utilizing online messages software like GroupMe to communicate ideas. 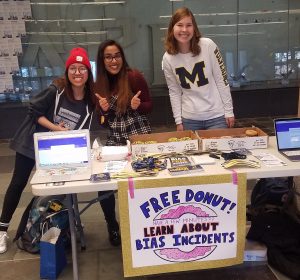 As we were working on this project, our group gained many skills that were useful for personal development. We learned to inform other team members when problems arise such as schedule conflict and to give each other’s honest feedback. This allowed us to have an open and efficient communication in a group setting. We also learned to formulate a clear and practical goal that our group could accomplish in a limited time and resources which helped us develop a smart planning strategy for future projects. It was definitely hard to coordinate meeting times with not only the other team members but also our partner Expect Respect, but we learned to still be actively engaged through different means of communication and to be more flexible. The acquisition of these essential skills defines the success of our project.

The project was a great success, and as such, we are excited about potentially putting on this event again, potentially once or twice per semester. Since the logistical elements have now been figured out, it would not be too difficult to put this event on again, and we were able to successfully connect with a lot of students in a short time period. Moving forward, our team is considering continuing to work together and with BLI to sponsor this donut event once-twice per semester, but we also have individual goals within BLI. All of us are interested in continuing our leadership here in some capacity, whether than be through trips, the capstone, or potentially teaching the course next semester!