Aequora is one of the many Latin words for “sea,” here with the connotation that the sea is calm and level (it comes from the same word, aequus, that we get our English word “equal” from). For my BLI Capstone Project, I decided to start an Aequora program at an elementary school in Michigan — and my experience was anything but calm and level! It was a wild wave of excitement, setbacks, enthusiasm, drama, emotion, and lots and lots of Latin — but I learned and grew so much more than I would have from an easier voyage, and for that I am grateful.

For a little bit about myself, I am finishing up my Junior year at the University of Michigan, where I am majoring in Latin Language & Literature and seeking a Secondary Teaching Certification from the School of Education — basically, I am a nerd about all things Latin, and I want to be a high school teacher when I grow up. 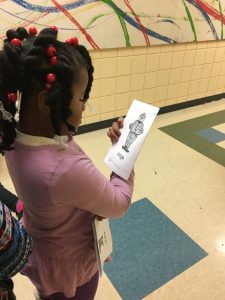 In the dark winter months of 2016 I was told to check out The Paideia Institute’s website for a summer program that a friend thought would interest me. I saw something else on that site though — an outreach program called Aequora that sought to bring afterschool programs that taught Latin to elementary school students in somewhat disadvantaged school districts. The name was chosen because the first Aequora operated out of an afterschool program called Still Waters in a Storm (get it!? Because Aequora means “still waters”), which is still running to this day. They were looking for volunteers, specifically for more people to start sites across the country.

Around the same time a professor introduced me to the Barger Leadership Institute and their Capstone project, and I decided to put two and two together. For my capstone project I decided to bring Aequora to Michigan. I started a club through Eastern Michigan University’s Bright Futures program where I taught a group of second through sixth grade Ypsilanti students Latin. And thus, the storm began which agitated the sea.

The first phase of implementation involved communicating with stakeholders — the Aequora Michigan team was lucky enough to be supported by three incredibly helpful programs: The Barger Leadership Institute, who pushed us to work hard and get our dream off the ground, The Paideia Institute, who every step of the way provided help, tips, and resources for a successful Latin program, and Eastern Michigan University’s Bright Futures, an afterschool program set up in schools around Metro Detroit, who provided a wonderful and quirky home for us to grow as well as even more tips, support, and resources. We also rounded up a dedicated team of volunteers from the Classics Department at the University of Michigan, and I could not have done this program without their enthusiasm week after week. 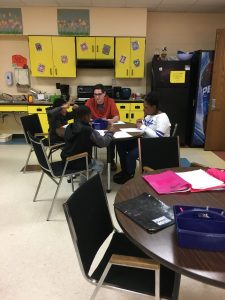 Once we had all our stakeholders in place and organized our resources, including our textbook and lesson plans, it was time to begin the lessons! This is where we took off, and where Aequora’s definition felt the most ironic; we had a bit of a rocky start to our program. Second to sixth grade is a big gap, especially since we had a textbook geared for fourth graders, and we often struggled to come up with activities that could appeal to all of our students. We also did not have the same group of students every week, since it was an afterschool program and parents picked their kids up at different times, which meant that we had no idea how much Latin was going to stick with them. Finally, we were all new and inexperienced afterschool class leaders, and discipline issues arose and were sometimes difficult to control. After one particularly harrowing game of Latin Simon Says, we knew that we were going to have to approach our classroom differently. It was our turning point.

If BLI taught me anything, it’s that I have to be proactive. So we adjusted our sails. We started dividing the kids up into groups based on age (and sometimes gender) — this assisted with the issues in range of activity, since we could do different exercises with different age groups, as well as with the discipline problems, since it was much easier to reason with groups of three or four rather than the whole group of ten to twenty. The attendance problem was something out of our control, but we still decided to work with it rather than write it off — and for the rest of the semester we focused less on grammar and vocabulary (no more games about imperatives) and more on the culture that surrounds the Latin language. We played a game where we walked around the room and identified significant landmarks from Rome (the Colosseum, the Forum); we read stories about the founding of Rome; we did a puppet show based on the myth of Theseus and the Minotaur. Once I realized that that was what was going to get the kids excited, I ran with it.

It feels like I am giving an Oscar speech now, but I really do have a lot of people to thank. I am incredibly grateful to Evan David, Liz Butterworth, Julia Spears, Vaughn Williams, Patricia Chen, Tiffany Purnell, Nancy Christensen, Lynn Kleimann Malinoff, Sandy Krupa, Stephen Haff, Danny Misra, Neena Pio, Malia Piper, Ed Nolan, and all of the wonderful students whom I was privileged to work with this semester. You all truly are responsible for getting this program up off of the ground, and I cannot thank you enough. I would also like to thank everyone who has supported me and believed in me as I went on this voyage across the unlevel sea.