The event we hosted was a Science Olympiad tournament to over 900 students across Michigan and surrounding states. Science Olympiad is a high school competition consisting of 23 different STEM-related with emphases in areas like astronomy, herpetology, physiology, and several others. Events range from completing a test to piloting a pre-built device, to completing a lab experiment.

All in all, I would say the Science Olympiad tournament that we hosted was very successful, albeit with a few hiccups along the way. Throughout the days leading up to the competition and during the competition we did run into a few problems. For example two teams decided to cancel attending relatively last minute. Although annoying, the event itself was not dramatically negatively impacted as we still had the vast majority of the other teams attending. However, the team did discuss what could be done in the future to discourage this type of behavior. Possible discussed solutions included a fine, not inviting them back among others. Other problems arose during the day of the competition when we discovered that we could not unlock several rooms that we had reserved before-hands. This caused one of our events to run a little behind schedule as we had to quickly find alternate classrooms for our participants. An unexpected fire-drill further exacerbated this problem. Nevertheless, the team stayed adaptable and found suitable accommodations relatively quickly. The last problem we ran into was the discovery that for one of the events, the final scores had been tabulated incorrectly, altering some placements for teams. To rectify this, we quickly sent out an apology after the event with updated standings and offered to send medals to teams that were affected. 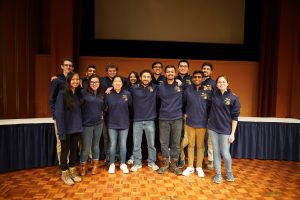 Overall, from the feedback we received from our participants, the event itself was organized very well. Compared to many other invitationals that they’ve been to, ours was organized at a much grander scale and generally provided better facilities. The additional prizes we gave to first place teams was also a welcome feature. For some individuals, the tests we provided were deemed “too hard”. However, we actually created difficult exams by design to truly test the preparation and intellect of our participants.

The event also developed several leadership skills and BLI habits. For example, we worked hard to build a team that had complementary goals and skill-sets from the executive board, to our sub- teams, to our volunteers. We also remained adaptable the days leading up to and during the competition when a lot of unforeseen mishaps arose.

Lastly, we worked hard to engage as many students as possible in our event in order to share our love of science and learning with as many individuals as possible.
From the team’s perspective, we are extremely pleased about how this event turned out and look forward to making it even better moving forward. This is something that we will continue discussing and planning throughout this year and next.