This is picture shows how fishing for a certain target species quickly can escalate into non-target species being caught and killed. 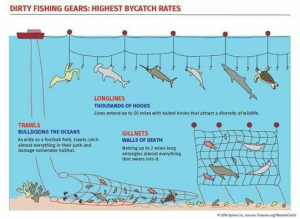 Many animals are impacted, with the species most drastically hurt being sharks, seabirds, turtles, and dolphins.

Sharks (in specific: blue sharks): Sharks are among the populations who are most devastated by bycatch, with about half of global shark catches being bycatch. This occurs typically as a result of the use of long lines, with around 3.3 million sharks being caught each year as bycatch on long lines in the Pacific Ocean alone, however, nets can also be a culprit. The low reproductive rate of most shark species adds further to the negative impact bycatch can have on these populations. The combination of slow growth from reproduction and rapid decline as a result of bycatch has not gone well, as many populations have crashed completely. One such shark whose numbers are in rough shape is the blue shark. Through a combination of targeted fishing (they play a key role in the shark fin trade) and accidental bycatch, it is estimated that about 20 million blue sharks are killed every year. Despite the fact that the blue shark reproductive rate is generally higher than that of other sharks (they can produce up to sixty-eight pups per litter), the population is in rapid decline, with bycatch being a key reason why. It is estimated that populations of the North-western Atlantic variety are down between 50 and 80 percent, with the Canadian Atlantic variety seeing a 5 to 6 percent decrease in population annually. As a result of all of this, the blue shark is considered to be “near threatened” globally

Seabirds: Thousands of seabirds die each year from fishing. With the appeal of the bait being thrown into the water, it is common for seabirds to bet caught in the fishing equipment. Often times, they will be attracted to the hooks as they are being baited on the surface, and then get dragged into the water and drown. These birds can also get trapped in nets as they are being thrown and dragged and again get stuck in the water unable to fly away. Here is an image that shows how they are caught as bycatch: 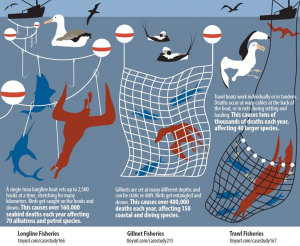 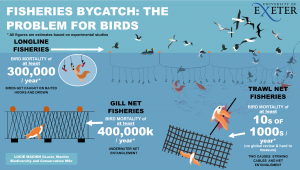 The Albatross is the most threatened species of seabird and is also one of the seabirds most negatively impacted by bycatch.  As an endangered species, bycatch us a significant concern for the livelihood of these populations. 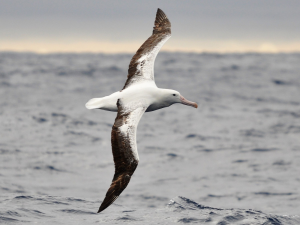 Turtles: Every year, over 250,000 turtles are accidentally captured, injured, or killed by U.S. fishermen alone as a result of bycatch. The types of turtles that are most susceptible are loggerhead and  green leatherbacks due to their location in relation to popular fishing areas . Injuries can be sustained based on the fishing supplies such as hooks which can attach to the turtles’ mouth and/or skin, or entanglement and strangulation can be caused by ropes and nets. Turtles are air-breathing reptiles, so if they accidentally get caught in fishing nets they can drown. These turtles that are being harmed are protected under the Endangered Species Act, but there is no provision specifically protecting these animals from the dangers of bycatch, leaving them susceptible to harm.

Turtle Excluder Devices (TEDs) are a newer fishing technology that have started being implemented in an attempt to reduce the harm to turtles as a result of bycatch. TEDs are included in traditional shrimp or trawling nets, and involve an opening that allows for turtles to escape if they end up getting trapped in the net. In addition, the transition from J-hooks to circle hooks on longline fishing enterprises would reduce the potential harm to turtles. J-hooks are metal hooks where the point is located parallel to the shaft of the hook, forming a j-shape, while circle hooks have the point located perpendicular to the shaft of the hook, forming a circle. Circle hooks are efficient at reducing bycatch as they are able to slide over soft tissue due to the point facing the shaft of the hook, offering species more protection when they come into random contact with the hooks whereas the j-hook is more likely to get snagged on a non-intense species due to the point being less protected. 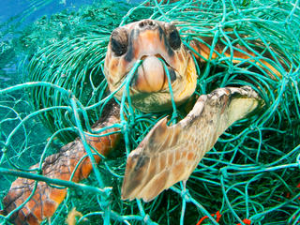 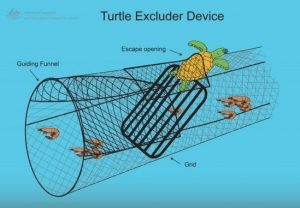 Dolphins: Bycatch is estimated to kill approximately 300,000 dolphins per year in European and International waters. There are numerous species of dolphins that are impacted by this issue such as the bottlenose dolphin and the vaquita, the smallest of the dolphin species, pictured below. 10% of these dolphins end up stranded while the remaining 90% sink to the bottom of the ocean and sadly drown as they are air-breathing mammals. The main types of netting which causes these tragedies include vertical opening trawlers, pelagic trawlers, and gill net fishing techniques. The dolphins end up caught in the nets as they tend to hunt the fish targeted by fisheries, by the time they are hauled aboard the boat and thrown back they are either injured or already dead.

The switch of fisheries from gilnets to long and hand nets can help to alleviate the number of dolphins killed per year by bycatch. The use of Remote Electronic Monitoring can also help to expand the coverage to ensure no dolphins are being caught up in the netting. Lastly, a more careful careful approach to mitigating and monitoring so high risk fisheries are dealt with quickly. 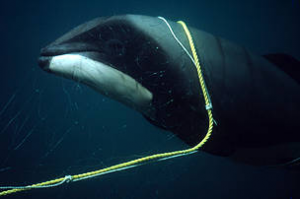