Why is Eutrophication an Issue? 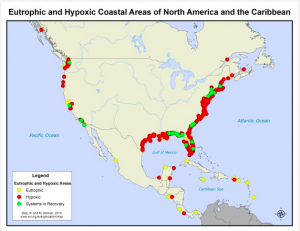 Eutrophication has become one of the leading causes of water quality impairment in the past 50 years. 65% of the estuaries and coastal waters in the U.S. (not including Hawaii or Alaska) researchers studied were found to be moderately to severely degraded by excessive nutrients.

Eutrophication in oceans does not solely occur in coastal waters–excess nutrients can travel through freshwater ecosystems such as lakes and rivers and then filter into the ocean. So human activities near freshwater environments can have an indirect effect on the health of oceans.

What is at Risk from Eutrophication?

The excess nutrients in water caused by eutrophication significantly degrade the quality of the water, often making it unsafe to drink. Pregnant women who drink this water are put at a particular risk, as the excess nitrates in the water can cause their baby to suffer from a lack of adequate oxygen levels in their blood, known as “blue baby syndrome.”

In 1878, an report in Alexandrina, Australia , was the first documentation of animal deaths caused by the drinking of water contaminated by algae. Cyanobacteria are ancient phytoplankton that form harmful algal blooms and release toxins. These toxins can harm humans through the drinking of affected water, contact with contaminated water, and aerosol inhalation as well. At the molecular level, exposure to these toxins can affect cells, tissues, and organ systems.

“Ten out of twenty army recruits in the United Kingdom (1989) showed symptoms indicating intoxication (vomiting, diarrhoea, central abdominal pain and sore throats) after training in water with a dense bloom of Microcystis spp. Two of them developed severe pneumonia and needed hospitalisation and intensive care.”

Sewage treatment involving nutrient removal is crucial in reducing the harmful effects of Nitrogen and Phosphorous on water bodies. 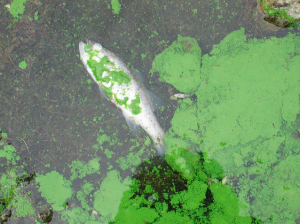 Harmful Algal Blooms (HABs), can threaten the health of humans and coastal recreational activities. HABs, or red tides, are caused by microscopic algae, and some of them can release toxins. These algae not only contribute to hypoxic zones where the lack of oxygen kills marine organisms and certain kinds of seafood, but these toxins can also make certain species unavailable for humans to enjoy. Even if certain species are not immediately killed by eutrophication, they can take up these toxins produced by algae which can then remain in the shells of shellfish. When humans then consume this seafood, they can then become ill from the toxins that these fish have taken up.

In the gulf of Mexico and Atlantic coasts, one specific kind of illness caused by toxins taken up by seafood is called neurotoxic shellfish poisoning (NSP), which can cause symptoms such as numbness and tingling in the extremities, nausea, vomiting, and diarrhea. One adaptive strategy to combat this health issue is the close monitoring of shellfish beds. 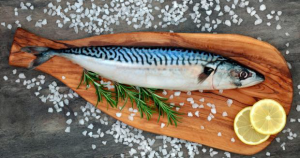 Ciguatera toxin is similar to NSP but is produced by a different kind of algae toxin, and its symptoms can last for weeks. This toxin is present in different levels of the food chain, and can harm to humans after the consumption of large fish such as mackerel (shown above) and barracuda.

Although harmful algal blooms are caused by microscopic algae, their mass accumulation can change the color of the water to green, brown, or red, and diminish the natural beauty of the coastal areas. The clear blue waters on the coast of the US that many travel across the country to see can be ruined by these algal blooms without efforts to reduce eutrophication. 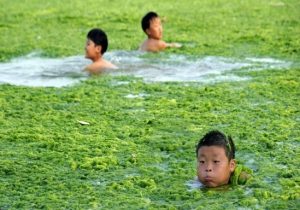 Human recreation is also adversely affected by algal blooms and eutrophication; visitors to the beach are advised to avoid contact with water with scum on top, or that appears to be discolored. Recreational activities on the water should also be avoided.

Not only does this algae also diminish the beauty and visual appeal of coastal areas, the decay of the algae also causes a foul smell, further discouraging people from enjoying recreational activities like swimming and beach days. 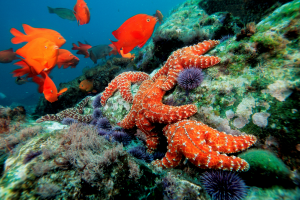 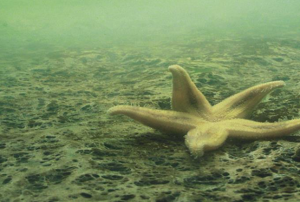 After: Starfish in a Baltic Sea dead zone

Entire marine environments are at risk when dead zones are created– from the vegetation on the ocean floor to coral reefs to fish and shellfish. The chain effect expands to threaten marine mammals like sea lions and shore birds such as herons that depend on the food source provided by vegetation and fish. When the oxygen levels in water nears two parts per million, mobile marine organisms attempt to relocate, which poses difficulties for larger organisms to find ample prey to survive. Organisms such as shrimp will experience stunted or halted growth in low oxygen environments, making them less available. This decreased availability will cause the price of shrimp to rise. 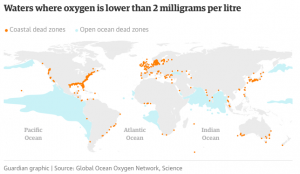 Low oxygen zones in marine ecosystems is also accompanied by dangerous feedback loops. For instance, in low oxygen environments, certain microbes are able to thrive, and some of them release Nitrous Oxide. This released greenhouse gas is 300 times more potent than Carbon dioxide, which has significant repercussions for global warming and perpetuating damage to marine ecosystems. 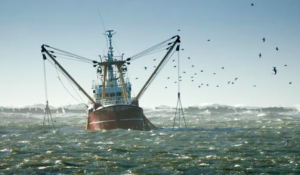 Because eutrophication kills fish, the fishing industry suffers with smaller harvests, and seafood becomes more expensive. The fish and shellfish that are caught in affected areas are full of microbes from the algal blooms, many of which, as explained above, are toxic to humans who consume them. 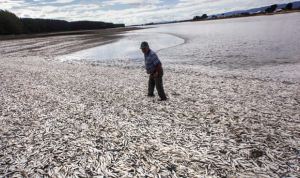 A fisherman on a beach in Temuco, Chile that is blanketed with dead sardines, a result of algal blooms that suck oxygen out of the water. Photograph: Felix Marquez/AP

In select areas, it can be seen that some algae is causing in increase in seafood catches around dead zones. However, this is not sustainable, and is evidence of the significant alteration of marine systems. Also, these catches that occur in near dead zones have potentially taken up toxins released by algae that can be detrimental to humans through consumption.