Eutrophication occurs when a body of water becomes over enriched by nutrients, particularly nitrogen and phosphorus. The excess nutrients cause two primary symptoms of eutrophication: 1) algal blooms 2) hypoxia. Algal blooms form because the excess nutrients stimulate the growth of phytoplankton, algae, and seaweeds, spreading over the ocean surface. With algal blooms absorbing the ecosystem’s oxygen for themselves and preventing sunlight from seeping through the surface, they harm marine life living below the surface, from plants to fish. Plants are unable to perform photosynthesis and manufacture nutrients without sunlight, and other organisms reliant on oxygen can not survive; therefore there is a significant reduction in the diversity of bottom-dwelling species. Hypoxia usually follows the creation of algal blooms, as the algae and other organisms die from the lack of oxygen. The dead algae and phytoplankton sink to the bottom of the ocean, and despite oxygen now being available in the marine ecosystem, the decomposition process uses most of it up. This lack of oxygen results in dead zones, areas that are not viable environments to sustain most aquatic species.

Human activities are the main causes of eutrophication. They include intensive agricultural practices, industrial activities, and population growth. Fertilizer runoff from farming, septic system waste leaked into bodies of water, and fossil fuel emissions all cause excess nutrients to enter marine environments. The Millenium Ecosystem Assessment discovered that human activities have caused the near doubling of nitrogen and tripling of phosphorus in the environment compared to natural amounts. 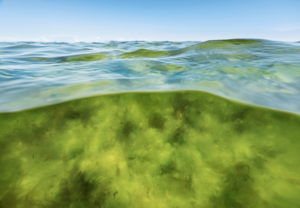