With the help of the BLI Global Scholarship, I was able to spend six weeks of this past summer studying abroad–five of those weeks were in Copenhagen, plus a week-long class field trip to Amsterdam, the Netherlands. This was my first time in the Eastern Hemisphere, and I’m happy to say I returned home with an increased sense of self-confidence and willingness to try new things as well as a more nuanced understanding of perspective, morality and compromise, both of which will continue to contribute to my success as a leader.

Getting off the plane at Copenhagen Airport, I was both nervous and excited. I knew I was going to be living in an apartment with 11 other girls (and one Danish Student Resident Advisor), but I didn’t know who any of them were. I knew I would be taking two classes that counted toward my majors in Psychology and Women’s Studies–Psychology of Human Sexuality and Prostitution and the Sex Trade–but I didn’t know much about these classes or about the cities they took place in.

Luckily, Copenhagen is easy to love. With its colorful canals and narrow streets filled with way more bikes than cars, it feels comfortably small for a capital city. Here are just a few of my favorite canal-and-bike-related Copenhagen snapshots: 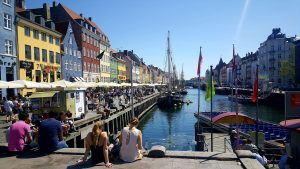 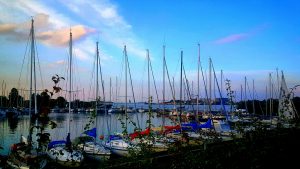 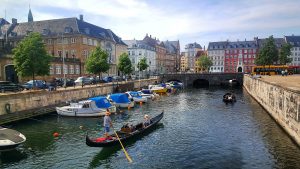 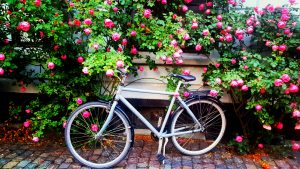 Check out those views! I realized early on that although my school work was important, the most valuable thing I could do for myself on my study abroad trip was to go out an explore the world around me. However, such adventures take a level of self-confidence that doesn’t always come naturally to me, especially considering my peers were a group of girls I had never met before and who were all from different schools than I was. Being away from my friends and family at home wasn’t always easy, but I’m delighted to say that in my time with these girls, I went on a number of adventures that I might not have gone on alone. Best of all, this trip challenged my self-concept and brought me to realize just how closely self-confidence, enthusiasm, and leadership are intertwined. I now think more deliberately about how closely connected my confidence of my own abilities is with others’ confidence of my abilities, and I know the risk of looking foolish can easily be overshadowed by a good sense of humor and some enthusiasm. This self-reflection and self-confidence will undoubtedly enhance my leadership abilities.

Here are some pictures of some of my post-class adventures! 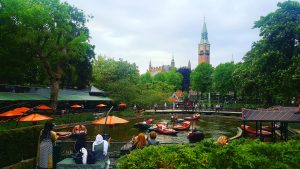 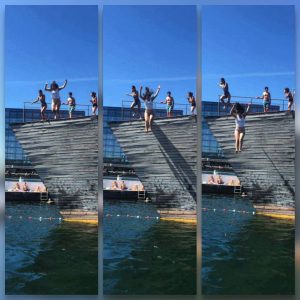 pictured: Island’s Brygge (kind of like a beach, but without sand and in a canal?); a small child whom I do not know (blue trunks) pushed me off of this platform (funnier than it was scary) 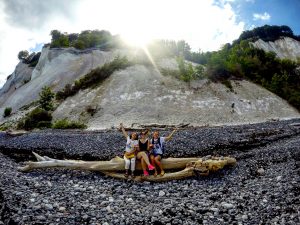 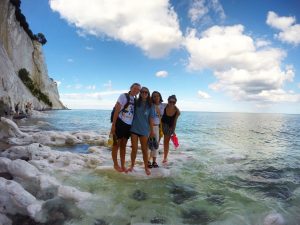 Finally, these two were taken on a weekend trip to Mons Clint, Denmark–just a (two hour) train ride from Copenhagen!

Inside the classroom, my biggest learning moments came at times when my morality was challenged. For instance, in Psychology of Human Sexuality, I was challenged to think critically about a number of controversial issues, such as the difference between pedophilia (as a mental disorder) and child molestation (as a crime). Then, the fifth week of my study abroad program was spent with my Prostitution and the Sex Trade class in Amsterdam. There, we attended a number of presentations, each involving some aspect of sex work in Amsterdam. Presenters included a former prostitute, representatives of NGOs, and even a sex buyer. I said on my first day of Prostitution and the Sex Trade that I wanted to decide once and for all what my opinion on prostitution was and what policies were best for a country to implement; instead, I left the class with a much more nuanced understanding of a social, moral, and political issue and of the ways that it can effect different individuals and groups. To my surprise, this mission to expand my perspective (especially morally) was furthered when I read a book that none other than the sex buyer recommended to my class: The Righteous Mind: Why Good People are Divided by Politics and Religion by Jonathan Haidt. Between the moral challenges of these classes and the insight I’ve gained from Haidt’s book, I can genuinely say that I’ve come away from this summer realizing that not only does everyone have their own truth, but also that the best way to reach compromise in a world of differing–and sometimes conflicting–truths is to lower your intuitive defenses and genuinely make an effort to hear and understand the opinions of others–even if you find them offensive or morally wrong. I expect this purposeful effort to relate to others’ views will not only help me to make forward progress in personal relationships, but in group conflicts as well.

Plus, we took a canal tour! What a cool canal! 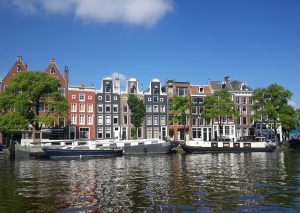 Once the program was over, and it was the night before I left my apartment in Copenhagen for the airport, I wrote in a small book for future study abroad students that they should “get ready to fall in love with [their] own lives.” It’s SUPER cheesy, and I knew that while writing it, but I also meant it. Studying abroad plopped me down in an inherently challenging, new environment, and the insights that I gained while there have positively affected me as a person and as a leader.