EnspiRed was an awesome show that is put on all for the benefit of others. This year we decided to donate to Ozone House. We were all pleased to see all of the people that came out to support us. We had six hundred seats and just about all of them were filled. We received a vast amount positive of feedback from people who came out to see the show. Additionally, a lot of the models expressed how much their confidence had been boosted since the beginning of modeling practice. BLI played an important part with show preparation by providing us with the funding to provide breakfast for our eboard, models, and production team by giving us a small grant. Breakfast is the most important part of the day and it definitely gave people a little boost of energy when they have something to eat when they are tired and haven’t had time to grab breakfast because the dining halls are closed early in the morning.

By: Davida Lee and Daijah Hills 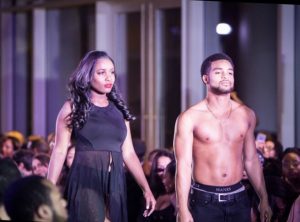 The Winter 2018 Charity fashion show put on by EnspiRED Runway was extremely successful. The Show was sold out and the audience loved it. The charity in which we raised money for was Ozone House, a nonprofit organization in Ann Arbor where they provide shelter for LGBTQ, homeless, neglected or abused youth. Seeing how many people came out to support us made the experience worthwhile. The process of securing looks for all of the models in our show for each scene of the show that they were in was not easy; however, with the help of the Barger Leadership Institute, I was able to execute the vision of our organization’s creative director for two of our scenes. I used the money that was funded through BLI’s small grant to purchase bags for our scenes third and fourth scene. Scene Three was themed Rebellion. Our models looks were supposed to depict clothing that goes against societal norms for gender. We had males in tight fitting clothing and accessories that are commonly associated with women and unacceptable to wear. For women, we had them dressed in clothing that has an androgynous feel and look. Scene Three was arguably our most fun scene because of the accessories. The money that BLI gave us went to me making fun phrases on the bags in the scene, making fun of being materialistic. This can be seen in our inspired Gucci, Chanel, and Hermès bags that had comical sayings on them. We at EnspiRED Runway were extremely grateful for the funding from BLI and send our utmost respect for the efforts you put forth on the campus at the University of Michigan.

By: Delorean Slaughter and Alexa Orlanda