Over spring break, twelve University of Michigan students embarked on a journey to the Ndakinna Education Center in Saratoga Springs, New York. Ndakinna is a center dedicated to educating student groups on Native American culture, particularly that of the Abenaki and Algonquin people. 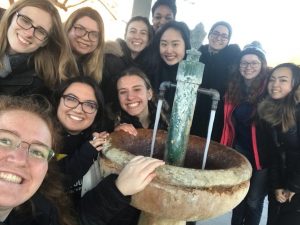 While at Ndakinna, we had the chance to hear from a number of speakers, including Joseph and Jesse Bruchac, members of the family who owns the center, as well as Kay, a local Mohawk woman. We also went on a few treks with Jim Bruchac, where he taught us wilderness skills including fire building and animal tracking. Here are a few things we learned along the way:

1. “Ndakinna” (pronounced in-DAH-ki-nah) means “our land” in the Abenaki language. 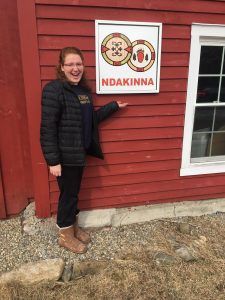 2.Many principles used by the Founding Fathers in the U.S. Constitution originate from Native American ideals, particularly from tribes belonging to the Iroquois Confederacy.

3. When building a fire, the paper-like bark from birch trees is your best friend. This is what we used to ensure that our sparks caught when Jim taught us how to build fires during one of our hikes.

4. Members of native communities in generations as recently as that of Joseph’s own father were forced into extreme cultural assimilation. Sterilization of native people was not uncommon.

5. There is not a distinction between masculine and feminine words in Native American languages as there is in many Romance languages. Instead, words are categorized by animacy: there is a certain set of nouns, adjectives, and verbs for living things, and another set for inanimate objects. 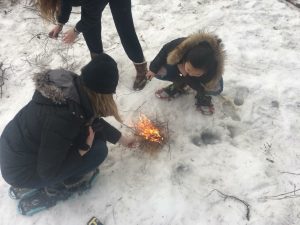 6. Saratoga Springs is the home of several springs that were famous among Native Americans for having healing powers. People would travel from far and wide to drink the water from these springs, which now runs in fountains located downtown.

7. Women hold respected roles in many Native American cultures. For example, among tribes in the Iroquois Confederacy, women are the only ones who can nominate, elect, and impeach tribe leaders. This was of particular interest to our group, since all twelve of us were girls

8. Many English words and names are borrowed from native languages. For example, ‘Michigan’ originated from the Algonquin word for ‘land that brings food.’

9. According to Mohawk myth, the Earth was formed on the back of a turtle by a girl named Sky Woman, the moon is our grandmother, and the Sun is our eldest brother.

10.When tracking animals, a good trick is to look for bark dust in the snow. If there is not a lot of tree debris in the tracks, then they are fresh.

This is just a taste of what we learned and experienced at Ndakinna. We took so much away from this trip, and we were lucky enough to be able to leave something behind as well. Each student group is given the chance to create a mural to commemorate their time at Ndakinna. Here’s ours

The mural represents aspects of the Mohawk creation story, including the Tree of Life and Brother Sun as well as an experience we shared involving Abenaki dance. We were so fortunate to hear so many stories from our site leaders, and now, in a sort of chainlike reaction, we have the opportunity to tell our stories as well. The Bruchacs taught us that in Abenaki tradition, storytellers would often say “Ho” when they finished their tale, and the audience would respond “Hey” to show they were listening.

So, I hope you have enjoyed the abridged version of our alternative spring break story; this is where I leave you: Ho… 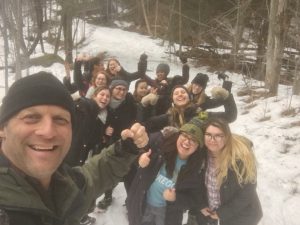