Our Global Africa: A Night of Food, Music, and Performances – Barger Leadership Institute
Skip to content

In conjunction with UMMA and the breaktaking exhibit, ‘Beyond Borders: Global Africa,’ ASA, CSA, BSU, and CoC shared their perspectives on how African culture, artistic expressions, and traditions are beyond borders. The exhibition explores identity, migration, and the international scope of art from Africa and the African Diaspora.

The event was an outstanding success! There were approximately 200 people in attendance to mingle and visit the exhibition before the performances, witness amazing performances, and enjoy delicious catering. The food must have been good because we ran out pretty quickly! Further, this event had a more diverse turnout in terms of racial and ethnic social identities than some of our previous events, which was exciting.

Pictured right: Jeremy Kwame, one of our co-hosts, introducing the next performance. Attendees viewed performances on the main floor of the Apse, as well as from the balcony.

We would like to recognize all the performers for the event:

Our team started small by meeting with Dr. Laura DeBecker, the Associate Curator of African Art at UMMA and Ms. Lisa Borgsdorf, the Manager of Public Programs at UMMA, in April of this year. They were hoping to collaborate with ASA on an interactive event surrounding the ‘Beyond Borders: Global Africa’ exhibition. From there, ASA members reached out to other student organizations part of the African Diaspora for performances to create an engaging, and educational evening of African artistic expressions. Once performances were finalized, we delegated speaking roles to our co-hosts, point person on ASA, and collaborators at UMMA. This skill of starting small contributed to a successful evening because everyone knew what their responsibilities were. 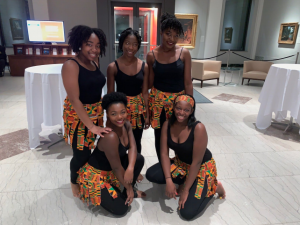 Pictured left: AMALA Dancers before their performance. The Amala Dancers’ mission is to promote self-love, pride, and unity to descendants of Africa and its Diaspora and to the greater campus community. ‘Amala’ is an Igbo word that means grace, as in grace of God. Amala also comes from the name of a dance “egwu-amala” that was popular among those that lived by the river. “Egwu-amala” can be translated as the “canoe dance” or the “mermaid-dance”.

We also utilized the BLI Habit, work to learn, during the planning process. For example, we learned that an effective way of gauging the educational impact of our event is by waiting for opportunities to present themselves. The gallery viewing, for some attendees, sparked a deeper interest in the inspiration surrounding the exhibition. A team member had the exciting opportunity to witness an attendee ask Dr. DeBecker about what led her to that position and which artist’s work in the gallery was her favorite. This interaction is an example of how running the event led to learning something that could not have been planned. Also, Creatives of Color, Caribbean Student Association, Black Student Union, and African Students Association have not collaborated on a event before, but after working together, conversations have already taken place for future collaborations.

Although the event was a success, there were some challenges along the way. During the planning process, sometimes the groupchat among the collaborating organizations was stagnant. We dealt with this challenge by personally reaching out to representatives from the other organizations, rather than asking for updates in the groupchat. This change in communication was more successful because the representatives were more responsive, and ASA members were able to start associating names with faces. During the event, one challenge was not having enough time for all performers to do a sound check. We dealt with this challenge by performing the sound check for as many performers as we could, and welcoming and encouraging the guests who arrived early to move to the cocktail tables for food and mingling.

Overall, we are very happy with the outcome of the event. It was a new event, with a substantial number of guests. We could not have done it without the tremendous amount of support from UMMA. 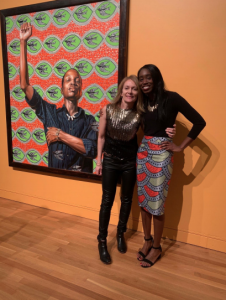 Pictured left: Ms. Lisa Borgsdorf, Manager of Public Programs at UMMA and Tosin Adeyemi, ASA’s point person for the event (and Kehinde Wiley in the flesh!)

Further, I’d encourage anyone interested in African Art to take HISTART 208, taught by Dr. Ray Silverman and Dr. Laura DeBecker. It was an amazing class that ended up leading to this entire event!

Unfortunately, the exhibit is no longer displayed, but more information can be found at the following link: https://umma.umich.edu/exhibitions/2018/beyond-borders-global-africa

Thank you again BLI for your support. We hope to collaborate again in the near future. 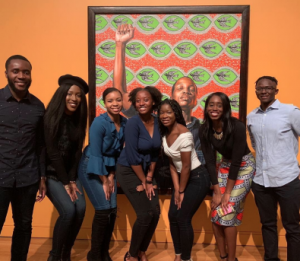