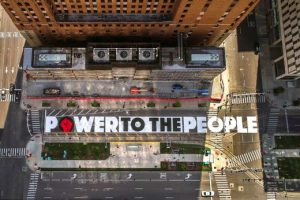 I decided to talk about the “Power to the People” mural on Woodward this week because the project sheds an amazing light on the city and its role in the racial injustice currently infecting our nation.  The New York Times article details the background of the project and its collaborators.  The project , led by the award-winning artist Hubert Massey, represents a moment of civil unrest that has literally changed Detroit’s landscape.  It was a part of the city’s Juneteenth celebration. Funding partners for the project included the Knight Foundation, Bedrock, General Motors Co., Eastern Market and Motor City Paint. While our nation has endured a lot this year, it is beautiful to witness the city of Detroit take initiative in social change.

As a response to the death of George Floyd, I am proud the city of Detroit is participating in effective forms of advocacy and social justice. Moreover, the mural gave Detroit students a wonderful opportunity to be a part of something transformative. Twenty Detroit students were involved in the painting of the mural. I am so happy that the people of Detroit made this happen!

1 thought on “Week Five Blog: POWER TO THE PEOPLE!!”