This is my second blog post for Week Four, since I’m unfortunately wordy. This one has pictures, though!

On Thursday, I also decided to take a longer way into work, at the recommendation of Pastor Kirstin. M-85 (also known as Fort Street) runs from Detroit all the way down into Southgate (in fact, Peace Lutheran Church is located directly on Fort in Southgate). Pastor Kirstin said that the change in the communities as I go from Detroit to Lincoln Park to Southgate is interesting, and it really was. When I was in Detroit, there were many more abandoned buildings and not a whole lot of cars on the road or people walking down the streets. In fact, Fort seemed to be a major trucking hub, as there were a lot of semi-trucks driving around me and a couple buildings where a lot of semi-trucks were parked together, seemingly to unload their cargo. 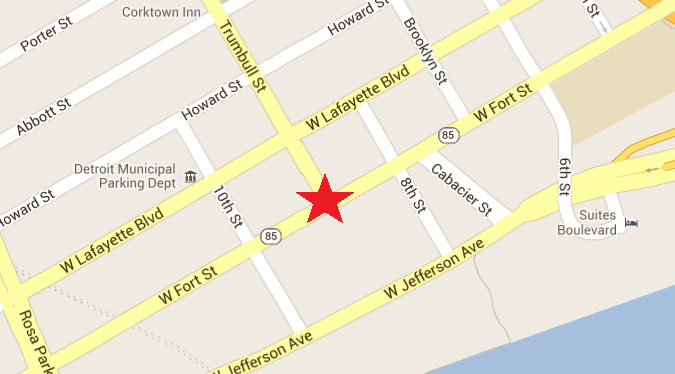 I did see a few really nice buildings on Fort in Detroit, but they were few and far between. One of them was the Southwest Safety Center, with fire trucks and police, and another was CHASS, a health center. There were also a few churches—all of them obviously promoting their bilingual services—but there were much fewer churches here than in the Downriver communities where I work.

I was able to snap a few pictures of the Ambassador Bridge (which I passed directly underneath) when I pulled into the parking lot for Border Control.

I also was stopped at a red light right outside of the Marathon factory. It was really sad to see, not even a block down the road from where I took this picture, obviously occupied houses lined up on Fort Street with people outside on their lawns.

I made a quick turn off West Fort onto East Fort, and all of the sudden I was on a newer six-lane highway with a well-kept median, virtually no abandoned buildings, and more cars and people milling about. Shortly thereafter a sign proclaimed that I was in Lincoln Park, and while Southgate is even more well-kept than Lincoln Park, it was still a shock to me. It made me really sad that there was such a discrepancy between Detroit and its neighboring community, and really opened my eyes to the differences that exist between where everyone else in the program is working and where I am working.

This difference was also emphasized by Pastor Jack, the regional synod’s Director for Evangelical Misson. Because my supervisors are on vacation for the next two weeks, they have arranged for me to meet with some of their superiors, which was incredibly kind of them. This week, I was able to meet with Pastor Jack, who lives in the Downriver area and is familiar with its history. We met for about two hours at Café Con Leche in Southwest Detroit, off Vernor Highway (which is delicious and I definitely recommend it to anyone that hasn’t been there yet) and we talked about a lot of great things. He showed me some demographic information for the Downriver communities and we talked a lot about sociological issues in the Metro Detroit area (it is one of my possible intended majors, and he got his Undergraduate degree in sociology, so it was very interesting for me) and how the Downriver communities are in comparison to the community of Detroit.

Using demographic information from the ELCA website (Evangelical Lutheran Church in America), he showed me that there is a small but significant increase in racial diversity in the Downriver areas. Specifically, the Hispanic community in Lincoln Park and Southgate has increased since 2009 and is projected to increase in the next count in 2014; this information is useful because local religious organizations and communities could then start to cater more to this growing demographic by trying to offer bilingual services, or maybe separate services in Spanish, and other programs and activities.

Pastor Jack also discussed a church in Trenton (a community that neighbors the ones that I am working in, and where Pastor Jack currently lives) that was right next to a school that experienced a huge jump of Arabic speakers in its student population (and whose first language learned in the home was Arabic) in the 1970s I believe, so they started offering programs in Arabic and English classes for native Arabic speakers. Now, they were doing much better because they listened to the needs of their community and met those needs.

I will be looking more closely at the demographic makeup of the communities next week, but I thought this was really interesting and I found Pastor Jack’s story really inspiring. It was just another example of how effective community-based research is, and it’s going to be my driving force for next week as I do more boring, statistical work.