This past Friday, I was, thankfully, able to participate in the first leg in an amazing journey. The Water Justice Journey is a 70 mile trip from Downtown to Flint in an effort to raise awareness about the issues of access to clean affordable water in areas including Detroit, Highland Park, and Flint. In addition to the information about the water shut-off crisis happening in both Highland Park and Detroit, I learned of a horrific situation that plagues the residents of Flint. Under the regime of the Emergency Manager, the municipal government leadership of Flint made the decision to remove Flint residents from service of the Detroit Water and Sewage Department and connected their water service to the Flint River. The Flint River is notoriously known for being toxic and unhealthy. Since being connected, the Flint residents have encountered countless health problems including lead poising, carbon toxicity, muscles stiffness, skin rashes, among other things. I can’t imagine how life must be for children, elderly residents, residents with compromised immune systems, and those with disabilities. The Flint residents have taken legal action only to have their case unjustly dismissed by their circuit judge.

So the journey began in the morning, a beautiful and sacred ceremony was held by Indigenous women near the Underground railroad monument in Hart Plaza, only to be disbanded by police officers…-__-

There was an amazing rally at the Spirit of Detroit! There were community member testimonies, words of encouragement, and even music. I was able to see L’oreal! Buzzing excitement and energy filled the event as everyone prepared to make moves on a long, but important journey. The first stop was at the ACLU for a screening of a short film made by Kate Levy.

The next event was a beautiful reading at the Cathedral of the Most Blessed Sacrament of excerpts about water from the Pope’s encyclical. This was approximately about 3.5 miles into the journey.

Next, we moved on to an event held in Highland Park at a wonderful place called Nandi’s Cafe. This was a cultural event that because a space for both participants and community members to create and share art together, include paintings, spoken word, and music. Then we attended a Town Hall Meeting in Highland Park, where residents convened to discuss their issues surrounding unaffordable water and make action steps. This was approximately 6 miles into the journey.

After this, we needed to make the final 5 miles or so till our final destination at the First United Methodist. This was perhaps the most grueling part of the first day, but thankfully we made it there in quick time.

The night ended with a Light Brigade in Downtown Ferndale: 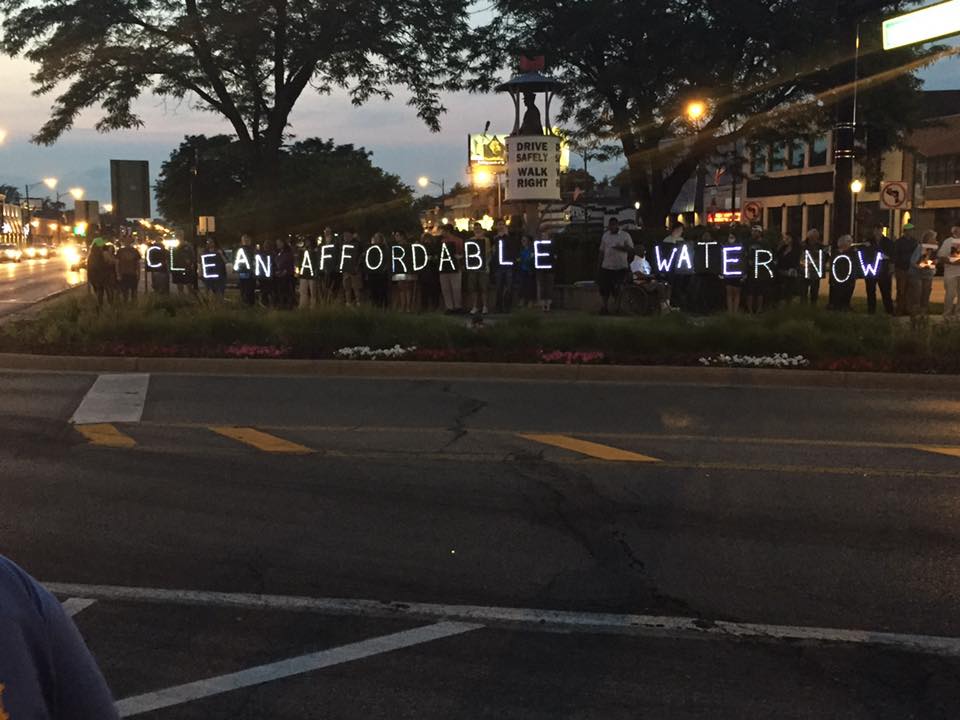